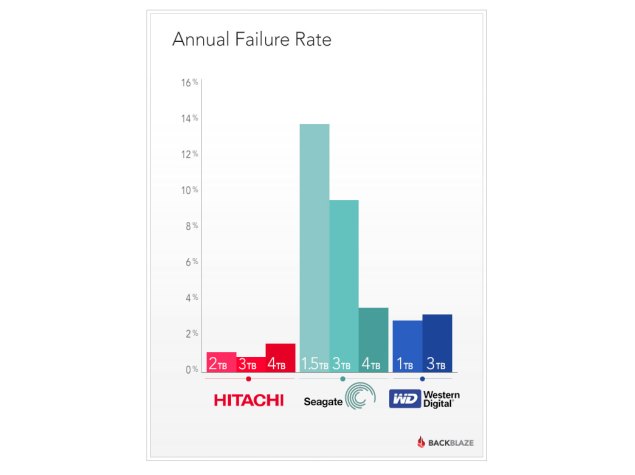 Online backup service provider BackBlaze has published a treasure trove of data about the reliability of the hard drives it uses. The numbers clearly show that on average, Seagate drives fail at a much higher rate than Hitachi and WD drives. Hitachi's failure rates across four models ranged from 0.9 to 1.5 percent, and WD's rate across three models was 3.2 to 3.6 percent.

In stark contrast, Seagate's failure rates across eight models ranged from 3.8 to 120 percent, with the extreme spike caused by two out of the three 1.5TB models used. Excluding these, Seagate's range topped out at 9.8 percent, which is still a considerably higher rate of failure than both its rivals. Newer Seagate 4TB drives are performing on par with WD's drives, but neither company has been able to match Hitachi's low figures.

The particular model that BackBlaze calculated to have such an unbelievable failure rate was the Seagate Barracuda Green (ST1500DL003). The figure exceeds 100 percent because not only did these drives fail, but the ones they were replaced with under warranty did too.

On the other end of the spectrum, Hitachi's Hitachi Deskstar 7K3000 (HDS723030ALA640) and Deskstar 5K3000 (HDS5C3030ALA630) were tied at the top of the reliability list with only 0.9 percent failure rates. Both are 3TB models, but are priced high enough that BackBlaze chose not to continue to buy them. 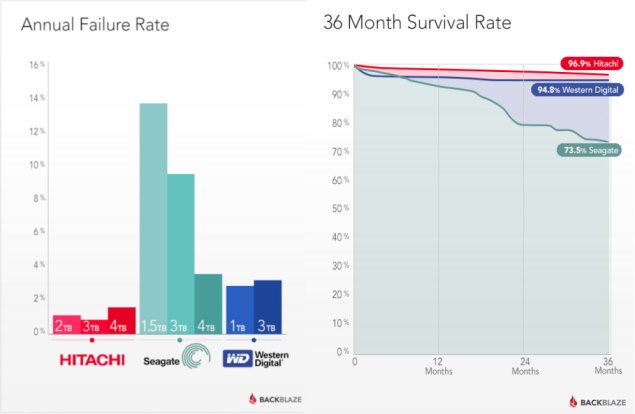 In fact, the company reports that it is currently buying more 3TB Seagate and 4TB WD drives, thanks to the balance of cost versus capacity as well as initial outlay versus downtime and replacement cost. The reliability report notes that WD has recently purchased Hitachi, so it remains to be seen whether Hitachi's products deteriorate or WD's products improve.

With 27,134 hard drives from various brands currently in use, the company is in a unique position to test and measure their reliability. The study did not consider drives from Samsung and Toshiba, as BackBlaze has not used enough of them to produce statistically significant data.

The company is well known for its approach to bulk data storage, which involves building massive storage "pods" out of consumer-grade PC hardware, including the drives. Data is saved in a RAID array to ensure speed and redundancy. Considerable effort is put into testing drives before they are deployed in bulk, since multiple units of the same model are likely to fail at the same rate.

Still, it is difficult to estimate whether or not a drive will fail, or after how much time and use it will become likely to fail. Another part of the study reveals that while 96.9 percent of Hitachi drives and 94.8 percent of WD drives remained healthy after three years in use, only 73.5 percent of Seagate drives were likely to make it that long. Seagate's drives also tend to fail more rapidly after roughly 18 months of use, whereas the other two brands' failure rates are more or less linear

The complete report can be read on BackBlaze's blog here.

Update (January 27, 2014): Tech news site TweakTown has dismissed BackBlaze's report as a publicity stunt, noting several potential holes in the backup service's data reporting methods. TweakTown notes that BackBlaze has used three different storage pod designs, each with different vibration damping and cooling properties. Additionally, depending on their position in each pod and the position of each pod in a server rack. The hard drive reliability data does not account for differences in the drives' operating environments and does not provide a breakup of drives' reliability in each pod type.