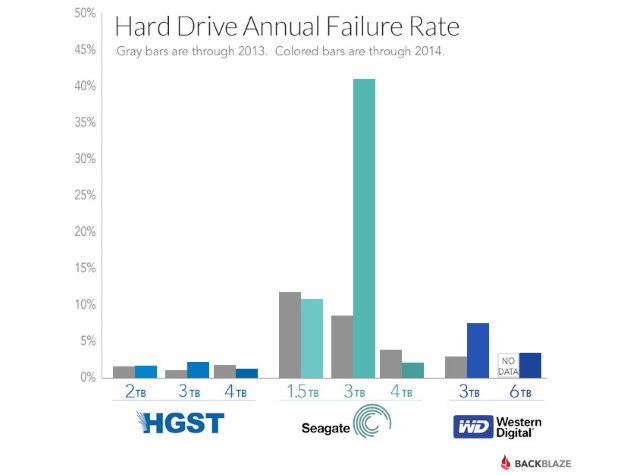 Exactly year ago Backblaze ignited a huge controversy by publishing data alluding to massive failure rates in Seagate hard drives compared to WD and Hitachi models. Now, the online backup provider has published updated statistics that show that older Seagate drives are still unreliable in general, but that newer models do not fare badly at all. Backblaze purchases thousands of consumer hard drives at a time and uses them in arrays called "pods" that it designed itself, in order to provide low-cost, redundant cloud storage. With over 41,000 drives in active service, the company is uniquely positioned to provide analytic data about drive health over extended periods of time.

Backblaze currently has 17 different hard drive models in service, ranging from 1.5TB to 6TB each. These are usually purchased in bulk, with cost being the primary deciding factor. Published data shows that Hitachi drives (now referred to as HGST) are still the least likely to fail and Seagate drives are still by far the most likely.

The 3TB Seagate Barracuda 7200.14, in particular, had a failure rate of 43.1 percent, though this was still lower than the incredible 120 percent failure rate of last year's villain, the 1.5TB Barracuda Green. In comparison, the 4TB HGST Megascale 4000.B had the lowest failure rate, at 0.5 percent.

However, the massive skew caused by one or two Seagate models masks the fact that newer 4TB models are failing much less often. Brian Beach, author of the blog post describing Backblaze's findings over the past year, opines that he is confident in Seagate's current 4TB offerings based on low failure rates in their first year of operation. Newer 6TB drives have not been in service long enough or in large enough numbers for meaningful reliability data to be gathered, though they seem promising.

Backblaze's experiences with 4TB drives from both Seagate and Hitachi have been positive. WD drives have not been available at the right price, and so the company has not used them in significant enough numbers. The company concludes that it would still prefer to purchase HGST drives, but that Seagate is still an option and would be purchased without worry when the price is right.

Backblaze says it will publish more specific data in the coming weeks. Last year's announcement was criticised for failing to disclose that multiple different pod designs were simultaneously in service, and for lacking specific information relating to the different operating conditions each set of drives had been subjected to.