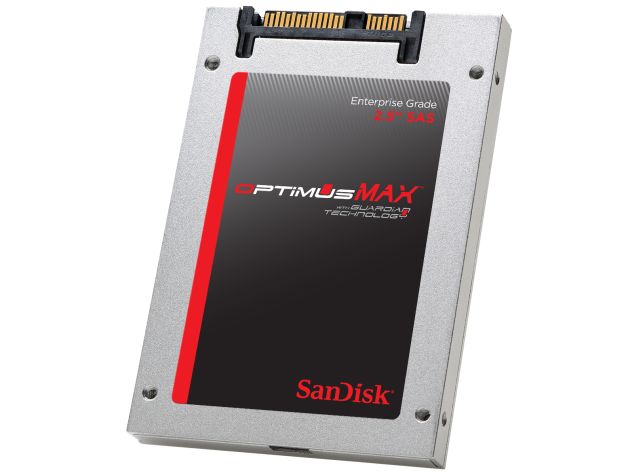 SanDisk on Friday announced the Optimus Max Solid State Drive (SSD), which it claims is the industry's first 4TB enterprise-class Storage-as-a-Service (SAS)-based SSD. The SSD is built on the 19-nanometre process technology. Since these drives are sold through channel partners, SanDisk hasn't divulged any details on the pricing yet.

The company said the Optimus MAX can handle anywhere between one and three full drive writes per day.

Talking to Computerworld on the storage-manufacturer's intention to up the ante to 6TB and 8TB SSD drives next year, Manuel Martull, SanDisk's product & solutions marketing director, stated in an email reply, "We see reaching the 4TB mark as really just the beginning and expect to continue doubling the capacity every year or two, far outpacing the growth for traditional HDDs."

"Customers have been looking for a way to transition their data centers from HDDs to NAND flash, but have been forced to decide between cost and performance, or give up important functionality," said John Scaramuzzo, Senior Vice President and General Manager, Enterprise Storage Solutions at SanDisk. "The Optimus MAX eliminates the need for compromises. We believe that the Optimus MAX will be a disruptive force within the storage industry, catalyzing many organizations to make the switch from their HDD-prominent data center infrastructures to SSDs."

Additionally, SanDisk also announced an upgrade to its 'Lightening Gen. II' family of SSDs with the company's 12Gbps SAS interface. The series now comes in three different versions: the high-endurance Lightning Ultra, the mixed-use Lightning Ascend and the entry-level Lightning Eco. All come with a five-year warranty and have a 2.5 million-hour mean time between failure ratings from SanDisk.

The high-endurance Lightning Ultra Gen. II SSD can perform 25 full capacity drive writes per day. It delivers up to 190,000 and 100,000 IOPS of random read/write performance and sequential read/write speeds of up to 1,000 MBps and 600 MBps, respectively. The drive comes in capacities ranging from 200GB to 800GB.

The Lightning Ascend Gen. II SSD has lower endurance and is capable of 10 full capacity drive writes per day. The drive is tuned for heavier read workloads for Virtual Desktop Infrastructure (VDI), Exchange and file server use and online transaction processing (OLTP). It is available in storage capacities ranging from 200GB to 1.6TB. This SSD delivers up to 190,000 random read and 80,000 write IOPS and sequential read/write speeds of up to 1,000 MBps and 600 MBps, respectively.

The entry level Lightning Eco Gen. II SSD is designed purely for read-intensive application workloads such as data warehousing, media streaming, video on demand and cloud computing. It can sustain up to three full capacity drive writes per day. This SSD is available in 1TB and 1.6TB capacities and delivers up to 180,000 random read and 35,000 write IOPS and sequential read/write speeds of 1,000 MBps and 500 MBps.

Both the Optimus Max SSD and the updated Lightning Gen. II SSD family of drives from SanDisk are expected to be available by the Q3 this year.