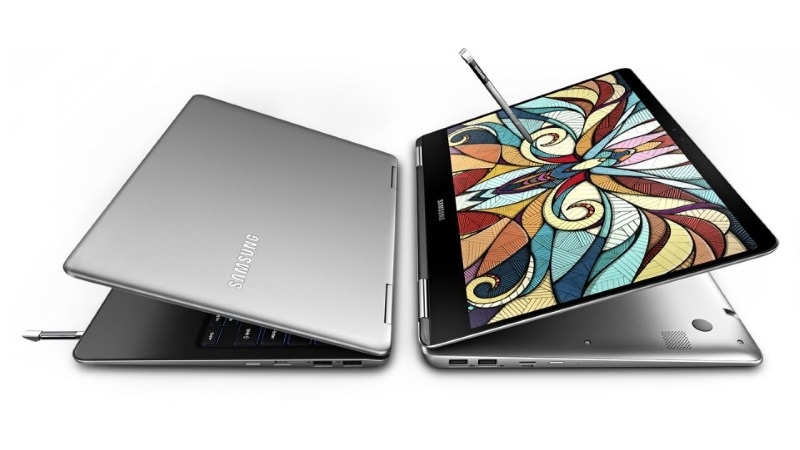 After initially keeping its S Pen stylus exclusive to phablets and tablets, Samsung has now launched its Notebook 9 Pro flexible laptop with an embedded S Pen. Launched at Computex 2017 in 13.3-inch and 15-inch display variants, Notebook 9 Pro comes with a 360-degree hinge and while the pricing and availability for the laptop has not been announced yet, it can be expected to be made available later this year.

The Samsung Notebook 9 Pro runs Windows 10 and is powered by a Intel Core i7 processor. Both 13.3-inch and 15-inch laptops feature full-HD (1080x1920 pixels) touchscreen display but the smaller variant comes with an integrated Intel HD Graphics 620 chip, while the larger one comes with dedicated AMD Radeon RX 540 graphics. The 13.3-inch model of Samsung Notebook 9 Pro packs 8GB of DDR4 RAM while the 15-inch variant packs 16GB of RAM. Both variants will be made available with 256GB of SSD storage.

However, moving to the most interesting aspect of the Samsung Notebook 9 Pro, the new S Pen stylus comes with a 0.7mm tip and can detect more than 4,000 levels of pressure, as per the company's claims. The S Pen further comes with Air Command feature that allows users to take notes, edit documents, and draw. "The S Pen is also fully compatible with Windows Ink Workspace for convenient use and additional Ink-powered features. The S Pen always stays on and never requires any charging," the company said in its release.

In terms of ports, the Samsung Notebook 9 Pro comes with two USB 3.0 ports, one USB Type-C port, an HDMI port, and a microSD slot. Other connectivity options on the laptop include 802.11 ac 2x2 and Bluetooth 4.1.