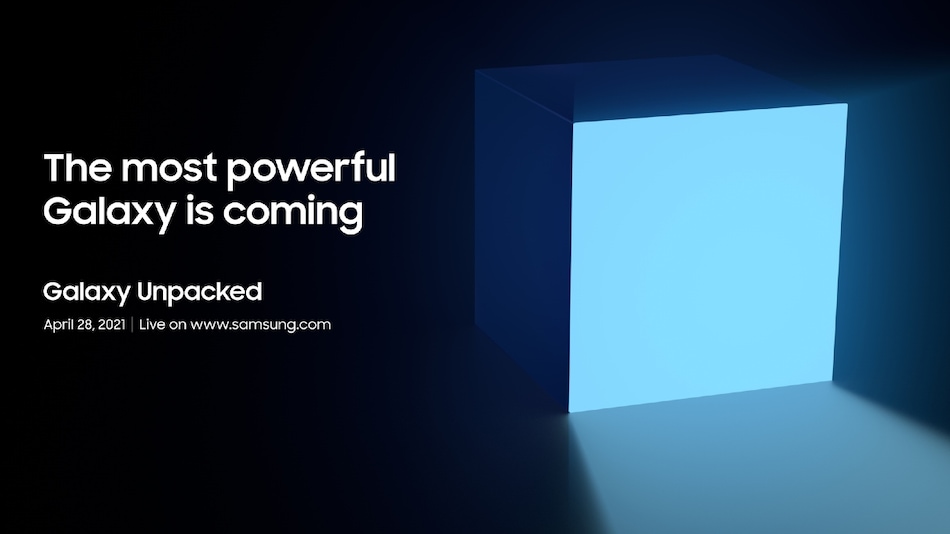 Samsung on Wednesday announced that it is hosting its next Galaxy Unpacked 2021 event on April 28. The virtual event, which will be the company's third Galaxy Unpacked of this year, will be livestreamed online and is expected to be the place where we could see new Galaxy Book laptops as well as some next-generation Chromebooks. This is unlike the two earlier Galaxy Unpacked versions where Samsung brought its new smartphones. Exact details about what Samsung is launching on April 28 are yet to be officially revealed.

The next Samsung Galaxy Unpacked 2021 will begin at 10am ET (7:30pm IST) on April 28. The event will be livestreamed through the Samsung Newsroom site and Samsung YouTube channel.

Samsung has released a teaser video that gives us a hint at the launch of the company's next-generation computing devices. The video claims that “the most powerful Galaxy” will be unveiling at the virtual launch event. You can watch the teaser video embedded below.

Although Samsung hasn't provided any particular details about what it is bringing at the Galaxy Unpacked 2021 event later this month, the company is believed to unveil its new laptops. The coronavirus pandemic has already boosted the demand for computing devices and shifted interest of companies from smartphones to laptops and tablets.

The rumour mill has suggested that the Samsung Galaxy Pro and Galaxy Book Pro 360 could be the two key models launching at the Galaxy Unpacked 2021 event. Tipster Evan Blass just earlier this week leaked the purported renders of both new Galaxy Book models.

In addition to the Galaxy Book Pro models, Samsung is speculated to have the Galaxy Book Go in the works. The affordable laptop purportedly appeared on the US FCC website with two different model numbers.

Samsung may also have its new Chromebooks ready that could debut at the Galaxy Unpacked 2021 event. Companies including HP are also upgrading their Chromebook portfolios as the demand for affordable Chrome OS-based machines has reached new levels — owing mainly to the COVID-19 outbreak.

Interestingly, Samsung isn't the only tech company that is hosting its major launch event this month. Apple is also holding a virtual event next week where it is expected to unveil its new iPad models.