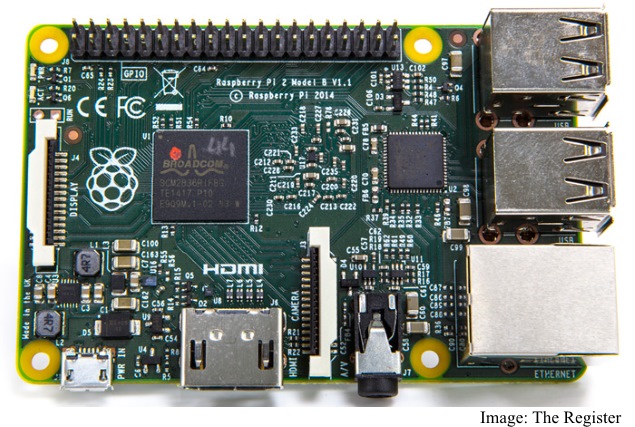 The Raspberry Pi foundation has quietly launched the first major new version of its popular low-power Raspberry Pi development platform, not too long after founder Eben Upton stated that no such product would be released till at least 2017.

The Register has details of the new Raspberry Pi 2 Model B, which has significantly upgraded components but will sell for the same price of $35 (approximately Rs. 2,167) that the previous Raspberry Pi Model B and its revision, the Model B+ sold for.

The most important new component of the new model is its Broadcom BCM2836 SoC, which has four ARM Cortex A7 cores. Previous Raspberry Pi models have been based on the Broadcom BCM2835, which was a single-core general-purpose application processor. The foundation estimates a six-fold performance increase, but states that this is a only a rough calculation based on benchmarks that do not adequately stress the system or utilise all four cores.

The Raspberry Pi 2 will also come with 1GB of RAM rather than the 256MB or 512MB of first-generation models. All other specifications are the same as those of the first-generation Model B+, including the single HDMI 1.4 output, 3.5mm composite video and stereo audio output, four USB 2.0 ports, microSD slot, 10/100 Ethernet port, Micro-USB power port, and 40-pin IO layout.

In a further surprise, the foundation and Microsoft have also jointly announced that the Raspberry Pi 2 will be able to run a version of Windows 10 as well as associated services. The move ties in with Microsoft's Windows Developer Program for IoT (Internet of Things) which aims to bring Windows to ultra-low-powered devices. The software giant is targeting entrepreneurs, hobbyists and tinkerers who might develop new ultra-personal Internet-connected devices. Windows 10 will be available for free for the Raspberry Pi. Previous reports of a Windows 10 update for current Windows RT devices already pointed towards some support for ARM architectures.

TheRaspberry Pi 2 will be available for purchase today, with an in initial batch of 100,000 units going on sale and thousands more being produced every day, according to Upton.

The previous-generation B+ model as well as the lower-cost A+ model will continue to be available at the same prices for industrial customers and embedded project developers who have invested in designs based around them.

Android 5.0 Lollipop-Based CM12S Build for OnePlus One in Final Testing
Apple Watch Gold-Plated Model to Get Its Own Safes in Stores: Report