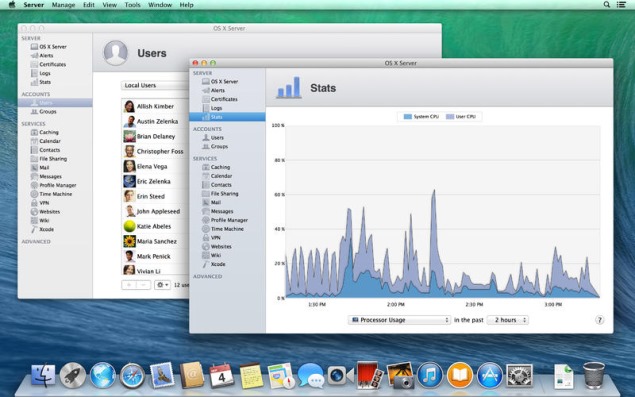 Apple has released version 3.1.2 of its standalone OS X Server software for OS X Mavericks. The update brings improved stability and support for more granular control over the Messages and Calendar functions.

According to Apple's own release notes, the Calendar Server now features better handling of group scheduling, invitations, and importing calendar data from other apps. The improvements to Messages Server relate to stability when using Chat Rooms.

There are also security and stability updates concerning the Profile Manager, specifically profiles containing variables when code signing is enabled. OS X Server allows administrators of networks to manage deployments of Apple devices and software. App licenses purchased in bulk via the Volume Purchase Program can now be assigned to profiles more reliably, and devices with long descriptive names are also now supported.

OS X Server is designed for small businesses, schools, and is even used by home enthusiasts. The suite includes features for file sharing and collaboration, Web hosting and publishing, remote access, file backups, email, and software development frameworks, amongst others. It is commonly used by network administrators in organisations that issue Apple Macs or iOS devices to students or employees in order to manage software updates and security.

The update can be downloaded from Apple's Mac App Store and requires OS X Mavericks 10.9.3. It is free for existing users or Rs. 1,200 for new users. OS X Server used to be a standalone operating system but was spun off into an optional component for mainstream OS X as of version 10.7.
Comments