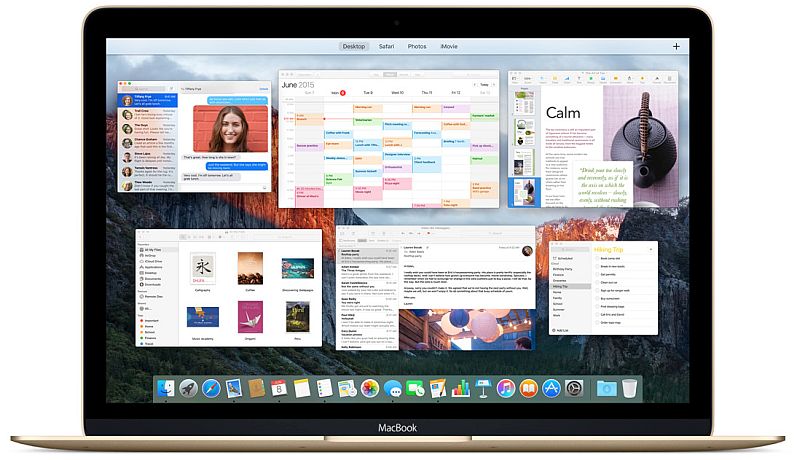 The new version of OS X bumps the version up to 10.11 and brings a host of improvements including performance enhancements to new features such as Split View. Apple at WWDC had detailed that the new OS X El Capitan and claimed that apps would switch twice as fast compared to Yosemite and apps launch would about 1.4 times quicker in general. The company also changed the system level font for OS X El Capitan to San Francisco.

One of the most highlighted features of OS X El Capitan was touted to be Split View, which will allow users to fill the screen with two apps of their choice. Another very minor update added a new gesture feature allowing users to shake their finger back and forth on the trackpad or give the mouse a shake to make the cursor bigger thus making it easier to spot it when it gets lost.

Mission Control, which can be accessed on any Mac using four-finger upward swipe on the trackpad, now places all the open windows in the same relative location. Spotlight is now more context sensitive with searches and delivers results for weather, sports, stocks, web video, and transit information.

A plethora of new features have been introduced in built-in apps in the OS X El Capitan. Mail now allows users to manage the calendar and contacts, right from inbox. New swipe gestures have been added which marks the messages as read on swiping right, and swiping left deletes it. The Photos app which was completely overhauled in Yosemite also sees some improvements in the form of new editing extensions. Users can purchase third-party extensions from the App Store. Safari has also received tweaks including option to pin a website to the tab bar. The pinned websites remain active in the background.