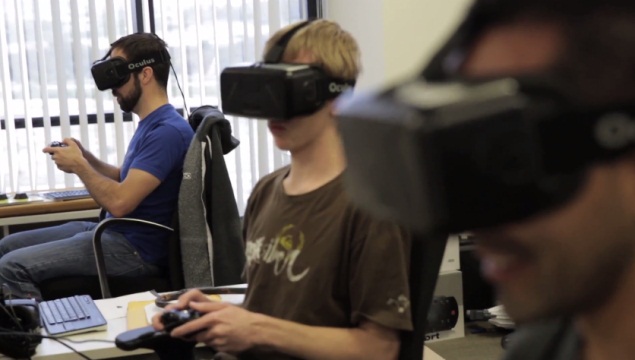 A recent report suggests that Oculus VR is building a motion controller for use with its virtual reality headset, the Rift. It's an important part of the virtual reality experience, and a lot of third-party developers have been building accessories for use with the Rift, or finding ways to pair existing motion accessories to the Rift. This move on Oculus VR's part could hurt the developing ecosystem, as the success of third-party controllers will likely be greatly impacted if there is an official controller for the Rift.

CNET reports that Oculus has been using some of the $2 billion Facebook paid for the company to create more product prototypes, particularly motion control, according to "people close to the development process."

It should be noted that Oculus declined to comment on the story, and the only quotes are from other companies whose statements essentially come down to saying that a motion controller makes a lot of sense for virtual reality.

It is a completely valid point, and given the enthusiasm with which devices like the Virtuix Omni treadmill and the Razer Hydra controller show how impactful these accessories can be in immersing users into the game world.

Even if the Rift does end up with a first-party controller, there are plenty of other headsets that have also been announced, so it is likely that makers of third party devices will not be short of options for long.

Sony, Samsung and Oculus seem to be the frontrunners right now, but at I/O, Google demonstrated that it's possible to use a smartphone and some cardboard, to make a DIY VR headset that works.

Oculus is yet to bring the crowdfunded Rift to the market, but the development kits have been available for a while now, and demonstration videos showing the Rift paired with controllers like the Razer Hydra show just how realistic and immersive the game experience can become.

This video, by a game developer who goes by the name Teddy0k on the Oculus forums shows what playing with a Rift and Hydra can be like:

A couple of months ago, Leap Motion also blogged about how to integrate their controller with the Rift headset, and the results look amazing.

Motion control on the Rift can help with not just building immersion, as we saw in the Hydra video, but could also help with the problem of inputs. When you're wearing the headset, you can't see the keyboard and type easily, so everything has to be accomplished using a controller. That's where Leap's set up really shines.

If Oculus is working on motion control as reported, it will be very interesting to see what direction the company takes, since it remains the front runner, and the most watched company in the field of VR right now, and their decisions could well set the stage for the standards that are used in VR.