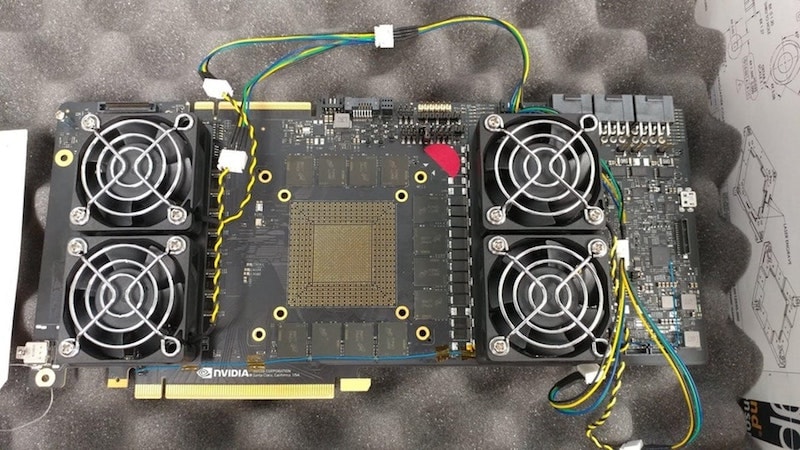 Nvidia's next-generation GeForce GPUs are in the works and one of the prototypes has found its way to Reddit. It seems to sport a 384-bit memory bus, 12GB VRAM, and three 8-pin power connectors along with a second generation NVLINK connector. As per estimates it could result in bandwidth output of 672GBps which is more than any Nvidia consumer grade card at the moment. To put it into perspective, a Titan V has 652.8GBps while the Tesla V100 is 897GBps. The prototype was posted by a Redditor claiming his "buddy works for a company that is testing Nvidia boards and this is apparently their new line up".

Some commenters suggest this prototype exists to prepare for 16GB density chips as what's in the picture appears to be unbalanced with "too much core and not enough VRAM for a pure compute card".

Nonetheless, Nvidia prepping a new line up of cards to the point where its being tested by external agencies is an interesting development when you consider that Nvidia CEO Jen-Hsun Huang announced that the company would not be launching any new GPUs for "a long time". Perplexing when you consider that the GeForce 10 series of cards have been around for two years, which has led some to speculate that the lack of next-generation GeForce cards has to do with the company overestimating Bitcoin demand. Perhaps this time Nvidia, would be able to answer the age-old question slash meme of a GPU being able to run Crysis maxed out.

Jokes aside, we won't be surprised to see Nvidia launch something this year, if for any reason but to stay relevant. There's proof of a launch in the works with Nvidia signing a deal with memory giant SK Hynix that could include GDDR6 memory supply for future GeForce cards.

Plus, cooling fan manufacturer Power Logic has stated it expects shipments to increase in the third quarter. The company makes fans used by global graphics card brands so it probably has an idea of Nvidia's roadmap, particularly with the rumoured GeForce GTX 1170 and 1180 GPUs.

Power Logic Chairman Hsu Wen-feng specifically called out the Asian Games 2018 in August as a possible tipping point for greater demand, perhaps hinting at when Nvidia may just announce its next-generation GPUs in August. Hopefully they won't be priced as badly as 10 series GPUs are right now, forcing Nvidia to sell its current range on its own website to undercut OEMs in markets like India.

Don't Own the PUBG Event Pass? This Is What You Are Missing Out On
Google Duo v36 Ends Jelly Bean Support, Teardown Tips Tablet Support in the Offing