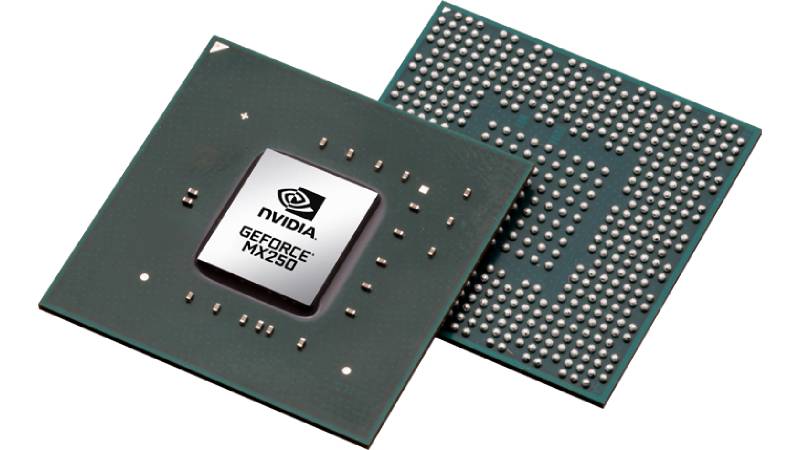 Nvidia has published details of two new entry-level laptop GPUs, the GeForce MX250 and GeForce MX230, which will replace the current GeForce MX150 and GeForce MX130. These GPUs are intended to deliver better graphics power than the current integrated GPUs offered by Intel, but will still slot below the GeForce GTX 1050 and GeForce GTX 1050Ti gaming GPUs. The GeForce MX line is meant to suffice for basic games and 3D acceleration and will be most commonly found in thin and light laptops that can't accommodate large cooling mechanisms. The two new models will most likely begin to show up in laptops soon, as Nvidia has just made them public.

The GeForce MX250 and GeForce MX230 are based on Nvidia's previous-gen Pascal architecture, which underpins the GeForce GTX 10-series of desktop and mobile GPUs. Nvidia claims performance increases of 3.5X and 2.6X for the two new GPUs respectively compared to Intel's UHD Graphics 620 integrated GPU, as tested on a Core i5-8265U CPU, which is one of Intel's most recent ‘Whiskey Lake' family processors. Nvidia has not published what games or workloads it used to arrive at those figures, though. There is also no indication of how the new GPUs stack up against their predecessors.

Nvidia has not published any specifications, including core counts, clock speeds, or memory configurations. We only have a list of supported standards, which include DirectX 12, Vulkan 1.1, OpenGL 4.6, and OpenCL 1.2. We also know that both GPUs use the PCIe 3.0 interface and will support GDDR5 memory. Nvidia's Optimus technology allows laptops to switch between their integrated and discrete GPUs on the fly. Laptop manufacturers will most likely be able to configure some aspects of these GPUs, such as maximum clock speeds, and so Nvidia advises buyers to check the specifications that these companies publish.

The new GeForce MX250 and GeForce MX230 will compete against AMD's integrated Radeon Vega GPUs, which are powerful enough for basic gaming. Intel is also working on a major overhaul of its graphics capabilities, following the hiring of former AMD graphics chief Raja Koduri. Intel has made no secret of its ambitions in the integrated and discrete GPU markets and could turn into a disruptive third player soon. The upcoming Gen11 iGPU is rumoured to be much more powerful than the current Gen9 GPUs that have not been upgraded significantly in years.