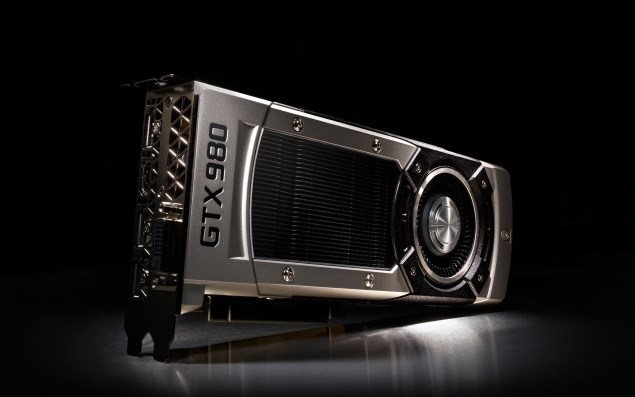 Multi-frame Sampled Anti-Aliasing (MFAA) also leverages the new GPUs by varying the sample pattern within and across individual frames, combining them to produce smoother edges without the computational overhead of conventional AA schemes.

Dynamic Super Resolution (DSR) improves image quality by rendering games at a resolution higher than what is displayed on a user's monitor, for example games can be rendered at 4K and downsampled to 1080p, which results in a higher quality image than rendering directly at 1080p.

Compatibility with VR devices including the Oculus Rift is improved, with lower latency and smoother compensation for head motion, which should reduce feelings of motion sickness. Two Maxwell graphics cards in SLI can be set so that each one renders the frames for one eye.

The new flagship GTX 980 GPU will have 16 streaming multiprocessor blocks for a total of 2048 CUDA cores with 128 texture units. The base clock speed is 1.12GHz but this can be boosted up to 1.21GHz. The GTX 970 is based on the same GM204 GPU but with only 13 functional streaming multiprocessor blocks with 1664 effective CUDA cores. The base speed of 1.05GHz can be boosted up to 1.17GHz.

Nvidia's official pricing for GTX 980 and GTX 970 cards with the reference design is Rs. 46,000 and Rs. 28,000 respectively. Third-party manufacturers including Asus and Zotac are expected to announce pricing for their customised versions of both cards shortly.
Comments

Samsung to Launch First Tizen Smartphone in India by November: Report
After Strong Debut, China's Alibaba Worth More Than Amazon and eBay Combined