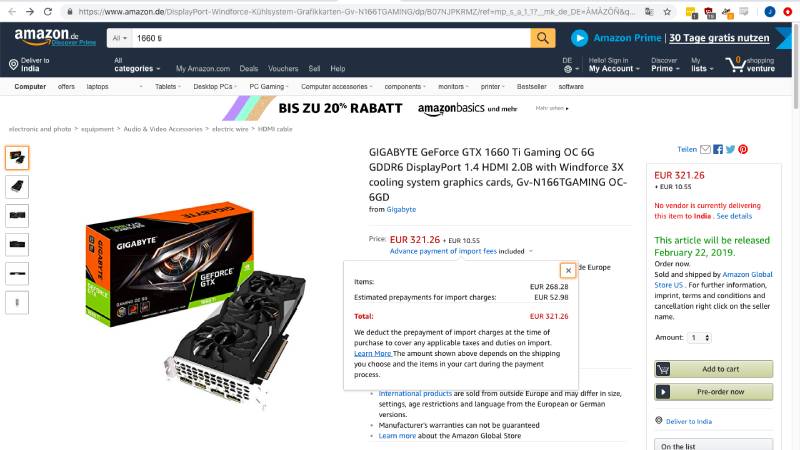 Rumours and leaks about Nvidia's purportedly upcoming mid-range GeForce GTX 1660 Ti GPU keep popping up, and multiple sources now seem to all point to a launch this Friday and an official starting price of $279 (approximately Rs. 19,915). The volume of rumours and leaks seem to all but confirm that such a product is actually about to launch. The new GPU would be a mid-range offering based on the same Turing architecture as the recently launched GeForce RTX 20 series, but with ray tracing features either disabled or missing entirely, in order to reach cost-sensitive audiences.

A Gigabyte GeForce GTX 1660 Ti graphics card appeared on Amazon.co.uk priced at GBP 286.11 with a release date of February 22, according to a Reddit post by user u/AlenF, but the page has since been taken down. Another Gigabyte-branded card, possibly the same model, was later spotted on Amazon.de by user u/zypthora with a price of EUR 321.26, and the page is still visible at the time of writing this story.

The German Amazon listing shows an Nvidia GeForce GTX 1660 Ti graphics card with a triple-fan cooler, backplate, three DisplayPort outputs and one HDMI port, but no VirtualLink USB Type-C port for VR, like the GeForce RTX series have. The card's packaging is also clearly shown. Specifications include 6GB of GDDR6 RAM on a 192-bit memory bus, but clock speeds are missing. Interestingly, the listing says that the product is sold and shipped by ‘Amazon Global Store US'. The item's price without shipping is listed as EUR 268.28 which is more in line with other leaks.

Yet another Amazon leak was noted by Hot Hardware. In this case, boutique system integrator iBuyPower listed two gaming desktop PCs featuring GeForce GTX 1060 Ti graphics cards. Earlier this month, a Russian online retailer called Mitcor seemingly published the specifications of MSI and Palit-branded cards, indicating base and boost clock speeds of 1500MHz and 1770MHz respectively. The GPU is codenamed TU116 and has 1,536 CUDA cores, according to screenshots published by Videocardz. It is also seemingly manufactured on a 12nm process.

On top of all of that, a leaked Final Fantasy XV benchmark score posted by Twitter user TUM_APISAK and spotted by Tom's Hardware seems to place the GeForce GTX 1660 Ti on par with the GeForce GTX 1070. At its expected price, this would be great news for gamers. However, this is just one benchmark of one game at one resolution, so it should not be taken as a general indicator of overall performance.

In late January, photos appeared online of Nvidia allegedly briefing Chinese manufacturers about the upcoming GeForce GTX 1660 Ti GPU. Several of the same specifications and details were indicated at the time, which gives these recent leaks more credibility.