Nvidia GeForce GTX 1180 to Be Revealed Next Month: Report 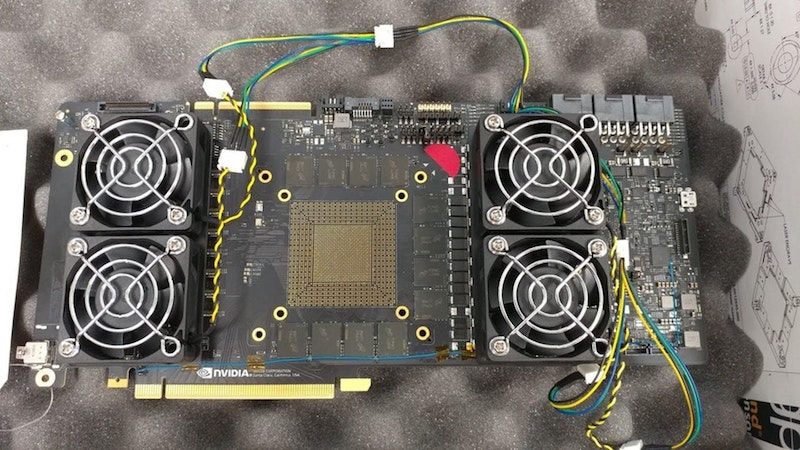 It appears that we may see the Nvidia GeForce GTX 1180 this August. The company's current GPU line up is over two years old and despite Nvidia CEO Jen-Hsun Huang stating that it would not be launching any new GPUs for "a long time", Nvidia has been sending out invites for an event at Gamescom 2018 - Europe's version of E3. In the past, Gamescom has been used by Nvidia to debut new software features to complement its hardware such as GeForce Experience streaming and PUBG getting Nvidia Ansel support. However, when coupled with leaks of what could be a GeForce GTX 1180 prototype and a video of a Lenovo representative claiming that  "time to market with NVIDIA 11 Series up to an 1180 down the road" at E3 2018 lends credence to a possible GeForce GTX 1180 release date at Gamescom 2018.

This would also line up with statements made by parts manufacturers such as cooling fan maker Power Logic that stated it expects shipments to increase in the third quarter. The company makes fans used by global graphics card brands so it probably has an idea of Nvidia's roadmap, particularly with the rumoured GeForce GTX 1170 and 1180 GPUs.

Power Logic Chairman Hsu Wen-feng specifically called out the Asian Games 2018 in August as a possible tipping point for greater demand, perhaps hinting at when Nvidia may just announce its next-generation GPUs in August. Hopefully they won't be priced as badly as 10 series GPUs are right now, forcing Nvidia to sell its current range on its own website to undercut OEMs in markets like India.

That said, he could be referring to an impending price cut. According to Digitimes, due to obscene amounts of current inventory of 10-series video cards, we could see steep discounts on existing GPUs that may extend to Power Logic's August time frame.

"Currently, the worldwide graphics card market has an inventory of around several million units and Nvidia has around a million of GPUs waiting to be released, said the sources. With cryptocurrency miners also expected to begin selling their used graphics cards to the retail channel, vendors are expected to introduce major price cuts to compete," a post from Digitimes reads.