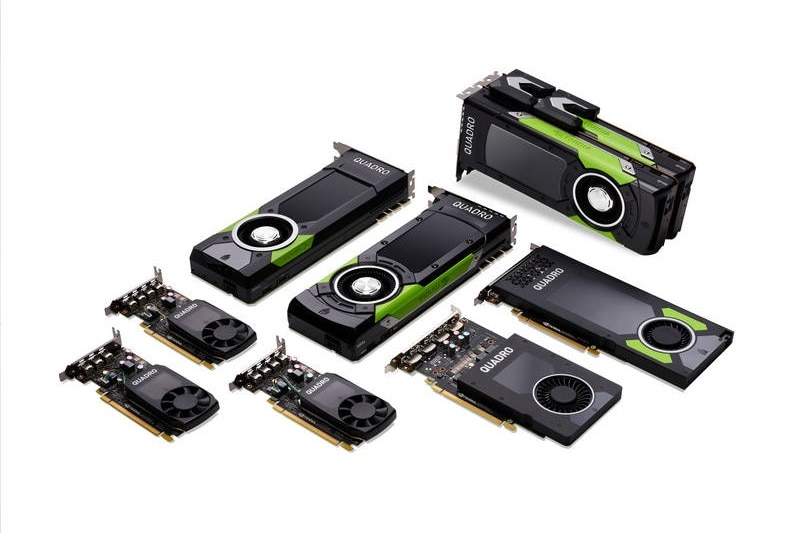 Nvidia has announced a new lineup of professional workstation GPUs based on its current Pascal architecture. The new products are targeted at content creators and anyone working with deep learning, VR, and complex simulations. The company claims that its new products deliver twice the performance of previous-generation models, and can transform workstations into supercomputers.

Nvidia points to the growing size and complexity of data sets required for current-day workflows in fields ranging from artificial intelligence to photorealistic CAD. According to the company, these new products allow users to carry out simulations, design, rendering and high-performance number crunching on a single workstation.

At the top of the line is the new Nvidia Quadro GP100, which is similar to the Tesla P100 accelerator launched last year. It promises unprecedented double-precision performance, with over 20 Teraflops of power. The Quadro GP100 has 16GB of ultra-high-speed ECC HBM2 memory. Users can pair two such cards together using an implementation of its server-oriented NVLink connector interface, which bridges two cards much like SLI does for desktop graphics cards. NVLink will allow the two cards to pool memory for up to 32GB of addressable space.

Lower down the line, the Quadro P4000, P2000, P1000, P600 and P400 models offer performance at a range of price points to suit different customers. They join the already announced Pascal-based Quadro P6000 and P5000 cards. The Quadro GP100 and P4000 are designated ‘VR Ready’ and can support up to four simultaneous 5K HDR displays. Up to 32 4K displays can be run from a single workstation using eight Quadro P4000 cards. The lower-end models feature smaller coolers and low-profile designs which are more suitable for server enclosures.

Nvidia hasn’t released pricing yet, and all cards are expected to be available only in March, in workstations from partners including HP, Lenovo, Dell and Fujitsu, and as standalone products from PNY, Elsa and Leadtek in different parts of the world.