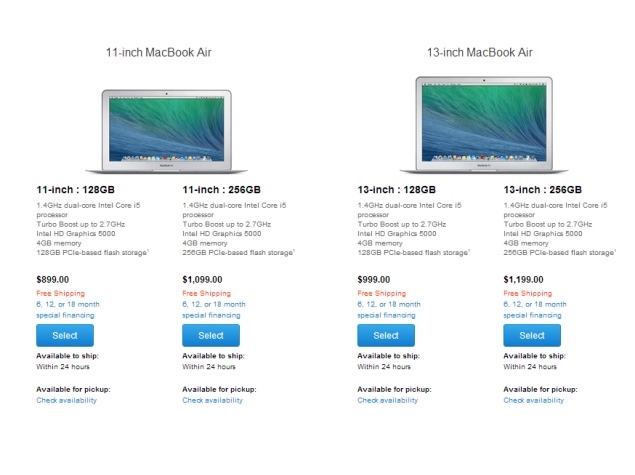 Apple quietly updated its MacBook Air lineup last week and dropped prices by $100 across the board, and now the first benchmark test results are available. The only difference in published specifications between the outgoing models and the new ones is a 100MHz CPU speed bump, but Apple appears to have made at least one other modification, by using slower SSDs. The company does not consider these refreshed units to be all-new models.

Both the 11-inch and 13-inch versions use the same CPU; a fourth-generation Intel Core i5 running at 1.4GHz. The variants launched last year used the same CPU, but running at 1.3GHz. The change is consistent with Intel's periodic refreshes of its CPU lineup as yields of higher speed processors increase over time after a new generation's launch.

However, Apple seems to have changed the supplier of the SSDs used in the MacBook Air. Apple uses PCI Express SSDs but does not disclose the exact model or manufacturer, and has often used components sourced from different manufacturers in different variants of the same model. All other specifications, including the integrated Intel HD 5000 graphics processor, amount of RAM, and choice of SSD sizes, are unchanged.

Apple-centric news websites Macworld and Apple Insider have published early benchmark results which demonstrate speed differences between the CPUs and storage subsystems of the 2013 and 2014 MacBook Airs. While Macworld ran its own Speedmark test, Apple Insider had a roundup of Geekbench scores which appeared in the tool's online database.

Apple Insider describes the changes as "relatively small but still measurable". While the 2013 MacBook Air scored 2,461 and 4,615 in single-core and multi-core tests respectively, the 2014 refresh scored 2,532 and 4,781 respectively.

Speedmark revealed improvements of between 2 and 5 percent in applications such as Photoshop, Aperture, Handbreak, Cinebench CPU, and PCMark 8. However, it took nearly twice as long to copy data to and from the new MacBook Airs' SSDs. In tests involving file compression and decompression, the new Airs were up to three times as slow. Macworld ran further benchmarks to test the storage subsystem and found significant reductions in read and write speeds.

Apple is also reportedly working on a much more significant update for later this year, which could feature a new 12-inch screen size and an even thinner body.
Comments