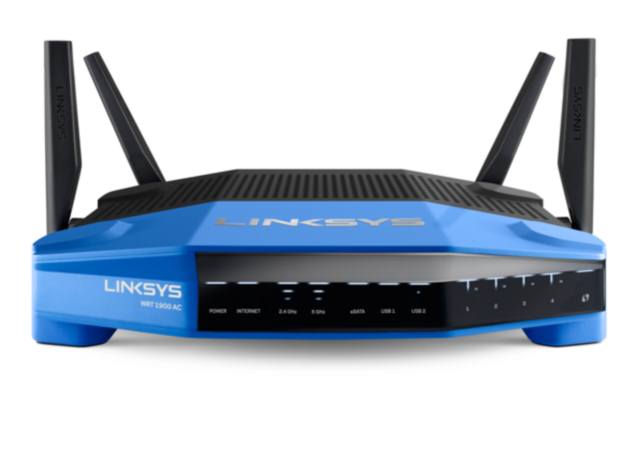 Linksys, now owned by Belkin, is trying to recapture the spirit of one of its most successful and iconic products, the venerable WRT54G. Launched in 2002, the elder WRT model was famously popular amongst enthusiasts and hobbyists because of its easily modifiable Linux-based firmware and onboard flash memory. The WRT1900AC is an attempt to rekindle this legacy as well as raise the bar for prosumer-class routers. Linksys has updated the iconic blue faceplate design and built an entirely new device based on today's fastest Wi-Fi networking standard. However, the new router will be a premium product, priced at US$ 299.99 (approximately Rs 18,715) when it launches in early 2014.

Amongst the WRT 1900AC's bragging points are a dual-core 1.2GHz ARM-based processor, 128MB of flash memory and 256MB of DDR3 RAM in addition to a USB 3.0 port and a combo eSata/USB 2.0 port for high-speed storage devices. The company is also working with the OpenWRT community, originally formed by fans of the WRT54G, to create an open-source firmware which will be freely downloadable in early 2014. Other popular custom firmware releases, especially those from the DDWRT and Tomato communities, are expected shortly too, and Linksys has publicly committed to providing hardware development platforms as well as software access in the form of SDKs and APIs to groups interested in developing custom firmware. The WRT1900AC will also ship with Linksys' own Smart Wi-Fi setup utility and management tools including smartphone apps that let users configure security and sharing options as well as access network-connected devices remotely. A unique Network Map feature shows users a visual topographic reference of all devices on the network and control access permissions and security with just a few clicks or taps.

All four LAN ports and the WAN port support connections of up to 1Gbps. As far as wireless capabilities go, the device supports simultaneous dual-band data streams in the 2.4 and 5GHz range, which support speeds of up to 600Mbps and 1.3Gbps respectively. Four adjustable, detachable antennas allow the router to choose which three to use to provide the best possible coverage to connected devices.