New giant 3D printer can build a house in 24 hours 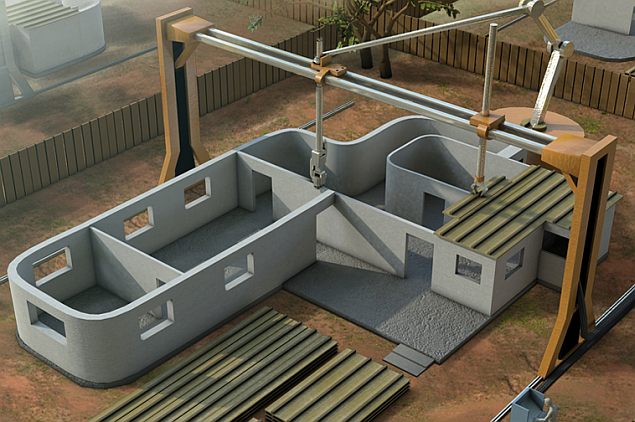 Scientists claim to have developed a revolutionary new giant 3D concrete printer that can build a 2,500-square-foot house in just 24 hours.

The 3D printer, developed by Professor Behrokh Khoshnevis from the University of Southern California, could be used to build a whole house, layer by layer, in a single day.

The giant robot replaces construction workers with a nozzle on a gantry, which squirts out concrete and can quickly build a home based on a computer pattern, MSN News reported.

It is "basically scaling up 3D printing to the scale of building," said Khoshnevis.

'Contour Crafting' is a layered fabrication technology and has great potential for automating the construction of whole structures as well as sub-components, according to the project website.

Using this process, a single house or a colony of houses, each with possibly a different design, may be automatically constructed in a single run, embedded in each house all the conduits for electrical, plumbing and air-conditioning.

The potential applications of this technology are far reaching including in emergency, low-income, and commercial housing.

The technology may potentially reduce energy use and emissions by using a rapid-prototype or 3D printing process to fabricate large components, according to the project website.

Featuring robotic arms and extrusion nozzles, a computer-controlled gantry system moves the nozzle back and forth.

"Our research also addresses the application of Contour Crafting in building habitats on other planets. Contour Crafting will most probably be one of the very few feasible approaches for building structures on other planets, such as the Moon and Mars, which are being targeted for human colonisation before the end of the new century," researchers said on the project website.

With the process, large-scale parts can be fabricated quickly in a layer-by-layer fashion.

The chief advantages of the Contour Crafting process over existing technologies are the superior surface finish that is realised and the greatly enhanced speed of fabrication, according to the project website.