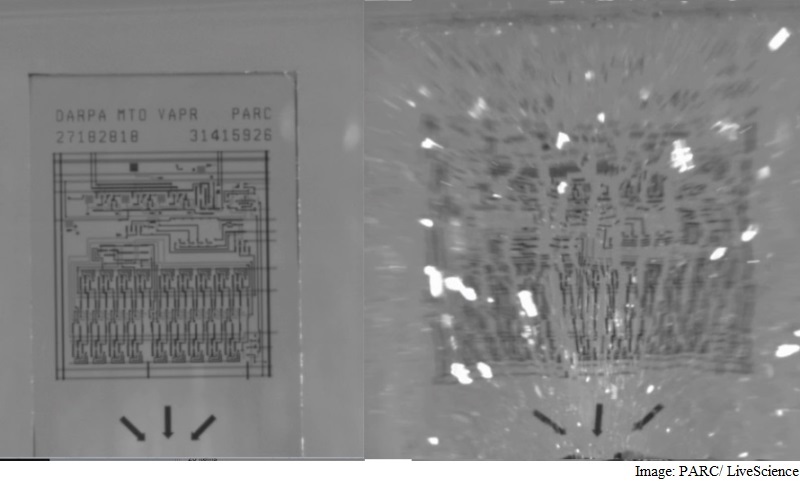 A new computer chip made of tempered glass that self destructs in seconds when remotely triggered could keep sensitive date secure, researchers say.

The new method uses silicon computer wafers attached to a piece of tempered glass that shatters into small pieces when heated in one spot.

The heat can be turned on via a remote, which in the future could conceivably be triggered by anything from Wi-Fi to a radiofrequency signal, said Gregory Whiting, a materials scientist and manager of the Novel Electronics Group that produced the chip at PARC, a California-based company.

Normally, glass is tempered by cooling the edges: The glass exterior shrinks, putting the exterior into compression while the warmer interior maintains incredible tensile stress. Though the glass is stronger than normal, "if you break a piece of safety glass, it kind of explodes, shatters explosively into little pieces," Whiting said.

Because glass is a poor temperature conductor, the heat-tempering process only works with pieces of glass that are at least 0.03 inches thick, whereas producing tiny particles requires thinner materials.

The team used a different method, called ion exchange, to temper the glass. The researchers started with a thin piece of glass that was rich in sodium ions, or atoms of sodium with one electron stripped off.

They then put the glass into a hot bath of potassium nitrate. Potassium ions then try to swap places with the sodium ions, but because the heftier potassium ions must squeeze into place within the silicon matrix, this creates enormous tension in the glass, Whiting said.

The new method allows for either attaching silicon wafers directly to the glass, or fabricating the two together. To induce chip suicide, the team triggers the chip with a tiny heating element, which causes a thermal shock that creates a fracture that spreads throughout the glass. Anything from Wi-Fi to radio waves could send the kill signal to the chip, Whiting said.