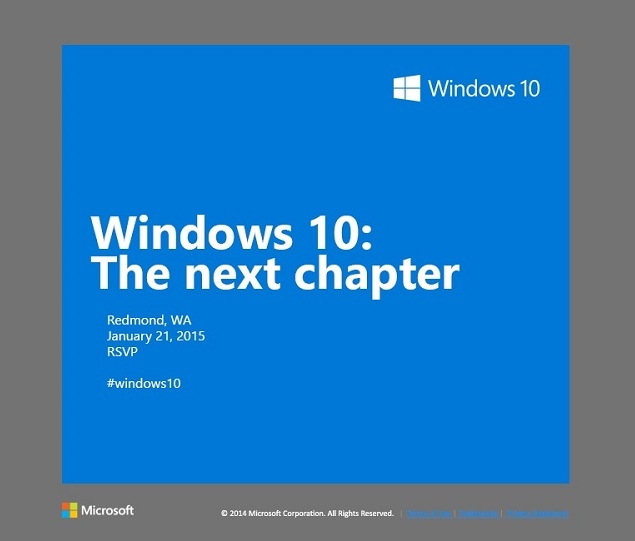 Microsoft on Thursday has announced that the company has scheduled 'The Next Chapter' of Windows 10 for next year on January 21, where it is expected to unveil the consumer preview of the upcoming OS.

The Windows blog notes that at the January 21 event, the senior leaders from the 'Operating Systems Group' including Terry Myerson, Joe Belfiore and Phil Spencer will talk about the Windows 10 consumer experience and what's next for the OS. The event will also witness CEO Satya Nadella, says company.

The event invite posted by Microsoft on Thursday, reads, 'Windows 10: The Next Chapter', and notes a date of Wednesday, January 21, 2015.

To refresh, Microsoft's Windows 10 operating system will finally bring the unified 'Threshold' ecosystem that's been promised for a while, with a single iteration capable of working across multiple form factors and device types, from desktop, laptops and tablets to smartphones and even the company's gaming console.

The Redmond giant when first announcing Windows 10 in late-September, said it had decided skip the name Windows 9 to emphasise the jump the new operating system will make in terms of catering to mobile devices and Internet services. Microsoft's Joe Belfiore had then added that Windows 10 will offer "the familiarity of Windows 7 with some of the benefits that exist in Windows 8" to help business users make the transition.

Microsoft released an 'early technical preview' (Read: How to Install) of Windows 10 soon after in October, and before the end of the month, released the first update for it, introducing the action centre and other UI improvements.