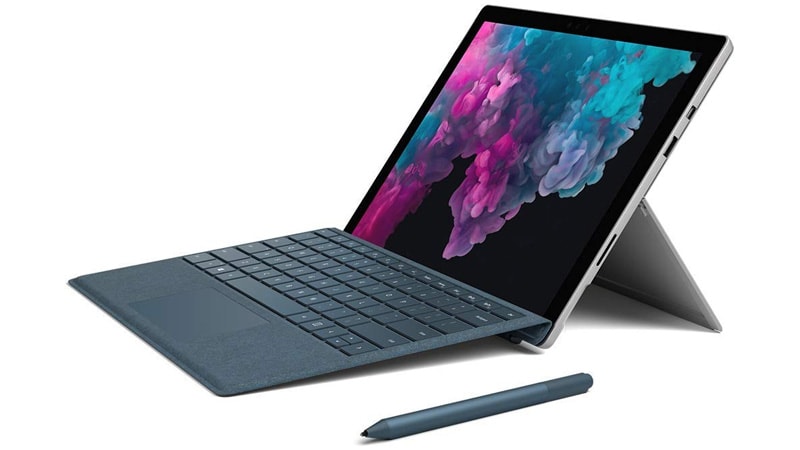 Microsoft Surface Pro 6 specifications and price in India
The Surface Pro 6 is the latest iteration of the company's hybrid Windows 10 tablet, which doubles up as a laptop thanks to its kickstand and the optional snap-on keyboard. The tablet features a 12.3-inch PixelSense Touch Display with 2736x1824 pixels resolution. There is an intelligent inking feature as well. The Surface Pro 6 is powered by 8th generation Intel U-series CPUs and packs either 8GB or 16GB of RAM, onboard Intel UHD Graphics 620, and various SSD options which go all the way up to 1TB. The tablet also has a full-sized USB 3.0 port, Mini-DisplayPort, 3.5mm audio jack, Surface Connect port, Surface Type Cover and a microSD card reader.

In India, the Microsoft Surface Pro 6 is available in different configurations with prices starting at Rs. 83,999. All models are available through offline and online channels, except for one model (KJV-00015), which will be available exclusively offline and also happens to be the most expensive configuration at Rs. 1,79,999. Currently, Microsoft hasn't listed any models with 1TB of storage for India as the max you can get is 512GB.

Microsoft Surface Laptop 2 specifications and price in India
The Microsoft Surface Laptop 2 is the follow-up to the original, which we reviewed sometime last year. The new model continues the same design language as its predecessor but gets more powerful internals thanks to Intel's 8th generation CPUs, which according to Microsoft, is said to be up to 85 percent more powerful than before. It also boasts of up to 14.5 hours of battery life and weighs around 1.28kg.

The laptop features a 13.5-inch PixelSense Touch Display with 2256x1504 resolution. It comes with 8GB or 16GB RAM options and SSD options include 128GB, 256GB, 512GB, and 1TB (not in India yet). It's powered by either an 8th generation Intel Core i5 or Core i7 CPU and features a full-sized USB 3.0 port, Mini DisplayPort, a Surface Connector port and 3.5mm audio jack.

“The beautiful and stylish hardware is an instrument that strings together our best solutions to help unleash users' creativity and sharpen their focus on honing their craft. For users seeking to make new breakthroughs in 2019, Surface will be a perfect companion to bring their innovative ideas and thinking to life,” Mohapatra added.