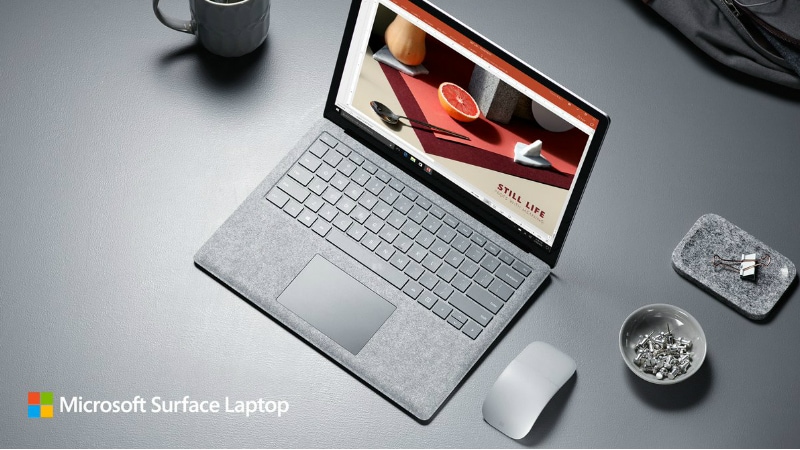 Alongside Windows 10 S, Microsoft also launched the Surface Laptop at its New York Spring event. The durable device runs on the education-focused Windows 10 S software, and is made available in four colour options - Burgundy, Graphite Gold, Platinum, and Cobalt Blue. The Surface laptop is up pre-order right away, and will be shipped starting June 15.

Microsoft claims the Surface Laptop is durable, portable, and lightweight, and the design looks sleek with a premium finish, and the iconic Alcantra fabric keyboard seen on the Surface Pro 4, with backlighting. The Surface Laptop sports a 13.5-inch PixelSense touchscreen display with 1080p resolution, 3:2 aspect ratio, and 3.4 million pixels. Microsoft touts it as the 'thinnest touchscreen LCD display' on a laptop. The base model of the Surface Laptop is powered by the latest Intel Core i5 processor, 4GB of RAM, and 128GB SSD storage, while users can opt for an Intel Core i7 processor and different memory and storage configurations.

The biggest highlight is that the Surface laptop is rated to offer up to 14.5 hours of battery life. Ports on board include a USB port, a mini DisplayPort, the Surface power connector, SD card slot, and the 3.5mm audio jack. The device weighs only 1.25kg, and thickness ranges from 9.9mm to 14.47mm.

Microsoft has used vapor chambers as heat pipes at the back of the laptop to help keep components cool - important, as there are no holes on the laptop that would normally have facilitated air cooling. With no holes, you may wonder where the speakers are - Microsoft has placed them below the keyboard. While the stunningly designed device with Windows Ink and Windows Hello support could lure some users, the price may dampen the excitement. Microsoft is asking for $999 (roughly Rs. 64,000) for the Surface Laptop with Core i5 processor, which is steep to say the least.

Microsoft claims the Surface Laptop's Intel Core i7 model is faster than the current Core i7-based MacBook Pro, and also added that it has better battery life than any MacBook Air laptop on the market today.

With the laptop running on Windows 10 S, the device has serious limitations like it can only run apps from the Windows Store - though users can choose to upgrade if they wish. As mentioned, the device is up for pre-order right away, and will be shipped on June 15. Microsoft is looking to compete with Chromebooks in the education sector, and the company even took the time to show off how apps like 3D4 Medical work on the new Surface Laptop, however, at this price range, direct competition will be impossible. Notably though, there are cheaper Windows 10 S PCs coming up, with Microsoft partners such as Acer, Asus, Dell, Fujitsu, HP, Samsung, and Toshiba all making Windows 10 Education PCs available from this summer starting $189 (roughly Rs. 12,100)