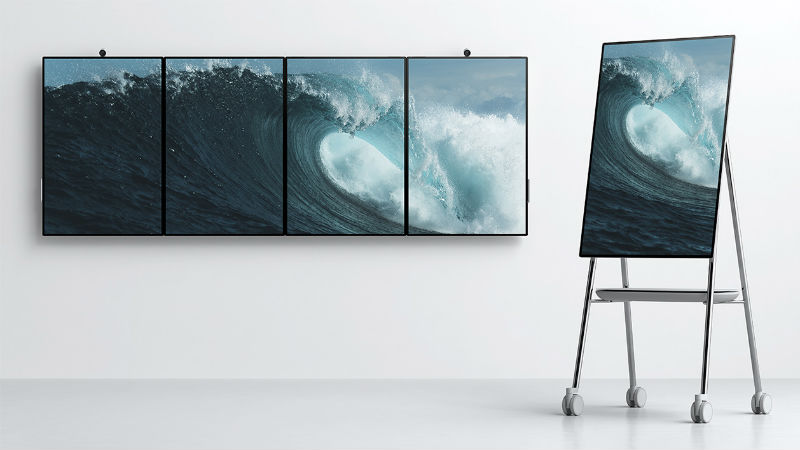 Microsoft on Wednesday unveiled the next generation of its giant conference room displays, called Surface Hub 2. The company had launched the original Surface Hub three years ago in 1080p 55-inch and 4K 84-inch variants. Meanwhile, the Surface Hub 2 will sport a 50.5-inch display with 4K+ resolution, 3:2 aspect ratio, and minimal bezels. Interestingly, the screen can now rotate to a portrait position.

The Surface Hub 2 was designed from the ground up to be used by teams, Microsoft says, "to get people out of their seats, to connect and ideate, regardless of location." As mentioned, it has a sleek 50.5-inch 4K+ display, though the exact resolution has not been mentioned. The display can be rotated with a slight push, turning it into huge portrait screen. This means it can be used for scribbling notes, as well as, for video chatting.

Users can also tile up to four displays together to create an even bigger display. They can also spread several Surface Hub 2 units around the conference room, each serving several roles. It also features rolling cases and mounts that have been co-developed with Steelcase. It's 3:2 aspect ratio is interesting, primarily because most large screen displays use the wider 16:9 ratio. Users can work simultaneously across Microsoft Whiteboard, PowerBI, PowerPoint, and a full view video call. Microsoft says in a blog, "Seeing four of the beautiful Surface Hub 2s lined up together has undeniable visual effect and will have a profound impact on what groups can accomplish together, allowing users to display multiple pieces of content side-by-side."

Microsoft has not revealed too many details about the specifications of the upcoming Surface Hub 2. As per the images posted on the blog, the new Surface Hub 2 appears to feature good hardware, but the company is also improving the software running on the new device.

It is working on a new dynamic collaboration feature. Using multi-user sign in, several people can authenticate in the same Surface Hub 2 workspace, allowing them to simultaneously access their documents and ideas, merging them with the ideas of their teammates. The software will be optimised for Microsoft Teams, and far-field microphones and 4K cameras will allow users to make video calls in portrait mode that appears to be almost life-sized. It will run on Windows 10.