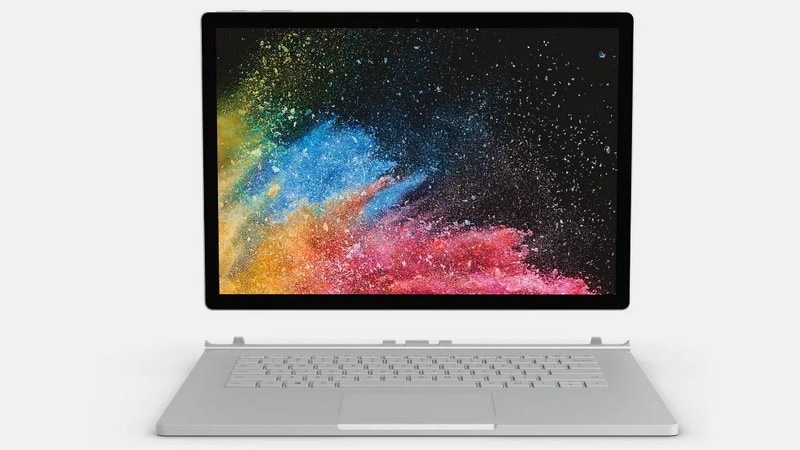 Microsoft's Surface Book 2 convertible is reportedly in line to get a processor upgrade, as numerous sellers have already listed a refreshed version of the laptop. Specifically, the base model of the Surface Book 2's 13-inch variant will soon get a quad-core CPU, replacing the dual-core seventh gen Intel CPU, which was present in the version launched back in 2017. The processor upgrade appears to be a mid-cycle refresh for the smaller Surface Book 2 model. However, Microsoft is yet to officially announce the upgraded variant or reveal when it will become available.

To recall, the base variant of the Surface Book 2 was launched packing the seventh gen Intel Core i5-7300U processor. This particular processor has two cores and has a peak clock speed of 3.5GHz. Now, some sellers in Germany and US have listed a new variant of the 13-inch Surface Book 2 powered by the Intel Core i5-8350U processor. This Intel offering has double the number of cores at 4 and also has a slightly higher turbo frequency of 3.60GHz. Additionally, the Core i5-8350U has 6MB of smart cache while the Core i5-7300U has 3MB of smart cache memory.

Aside from the processor upgrade, the rest of the specifications remain the same. The status of the Surface Book 2's 13-inch model with the Core i5-8350U is currently listed as “Coming soon” and it is already up for pre-order. US-based MacConnection is offering the device at $1,499 (around Rs. 1,05,000), while Germany's Metacomp is offering the Microsoft convertible at EUR 1,569.86 (around Rs. 1,23,000). The listings of the Surface Book 2 were first spotted by German website WinFuture.

As for rest of the features, the Surface Book 2 packs a 13.5-inch PixelSense (3000 x 2000 pixels) display with 3:2 aspect ratio. It is also available in a higher-end variant powered by the 8th gen Intel Core i7 processor coupled with either 8GB or 16GB of RAM. The device is offered in a 128GB base storage configuration, however, the buyers can choose between variants with 256GB, 512GB and 1TB internal storage options too.

Editor's Note: This story has been updated to reflect that Intel Core i5-7300U is a 7th-generation processor, not 8th generation. The error is regretted.