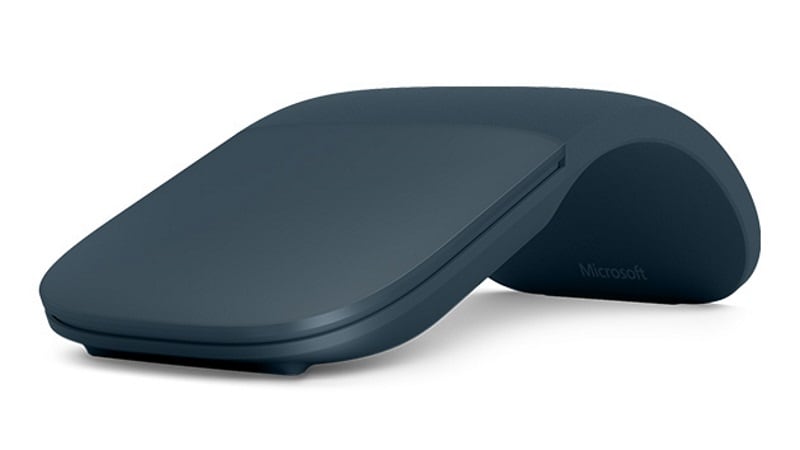 While Microsoft's new Surface Laptop and Windows 10 S managed to take the spotlight on Tuesday, the Redmond-based company also launched the new version of its Arc Touch Mouse - called the Microsoft Surface Arc Mouse. While the mouse still comes with the same arc design that provided a distinct look to the earlier versions, the latest iteration doesn't have distinguishable left and right click buttons as before. The company has priced the accessory at $80 (roughly Rs. 5,100) and interested users can already pre-order the device from company's website.

In order to power up the new Microsoft Surface Arc Mouse, users simply need to snap the mouse into its curved position and can snap it into a flat position to power it down, or better store and carry it. The new mouse comes with two buttons (left and right click) but on a single surface, featuring a capacitive touch 'full scroll pane'. It uses Bluetooth 4.0 for connectivity - this limits use with certain Apple and Windows 7 machines, the company said. The accessory comes with 2 AAA alkaline batteries (included) and has a battery life of up to 9 months, as per the company's claims. The Surface Arc Mouse has frequency range of 2.4GHz and will be made available in Burgundy, Light Gray, and Cobalt Blue colours - which complement the newly launched Surface Laptop.

The new mouse from Microsoft measures 131x55x14mm and weighs 82.49 grams. "Slim, light, and ready to travel, Surface Arc Mouse is designed to conform to your hand and snaps flat to fit easily in your bag," the company says on its website.

On Tuesday, alongside education-focused Windows 10 S, Microsoft also launched its Surface Laptop at its New York Spring event. The new device runs on the Windows 10 S, and will be made available in four colour options including Burgundy, Graphite Gold, Platinum, and Cobalt Blue. The Surface laptop has been made available for pre-orders right away, and will be shipped starting June 15.