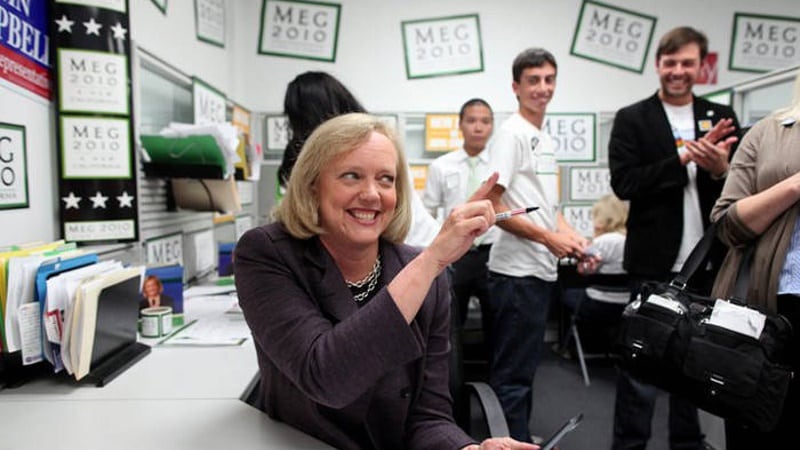 Meg Whitman stepped down as chairman and left the board of HP Inc., further distancing her corporate-computing company from the PC and printer businesses it split off in 2015.

Whitman, who is chief executive officer of Hewlett Packard Enterprise Co., has served as chairman of HP Inc. since the two companies were formed in the breakup of one of Silicon Valley's oldest firms almost two years ago. Chip Bergh, who is CEO of Levi Strauss & Co., will take over as chairman of HP Inc., the company said Wednesday in a statement. Bergh has served as lead independent director of the HP board since March.

For Whitman, formerly CEO of eBay Inc. and a onetime Republican nominee for California governor, stepping down as chairman reduces the remaining ties between her company, which sells servers and storage gear, and HP Inc., which has been gaining momentum on its own in recent months. The PC and printer company has reported four straight quarters of sales that topped estimates. Dion Weisler, who took the reins after the split, remains CEO of HP Inc.

"HP has now been a standalone company for almost two years and I'm proud to have helped get the company off to a great start," Whitman said in the statement. "The HP board is among the most diverse in our industry, and the company has established a proven track record of successfully delivering on its commitments."

Whitman has also been mentioned as a candidate to fill the top role at Uber Technologies Inc., the ride-hailing mobile-app company that ousted founder Travis Kalanick last month. Whitman has been meeting with Uber's leadership in recent weeks, two people familiar with the matter said earlier this week. A spokesman for HPE said she intends to remain at the Palo Alto, California-based technology company.

Amazon Is Now Hiring: Plans to Make Thousands of Offers in 1 Day