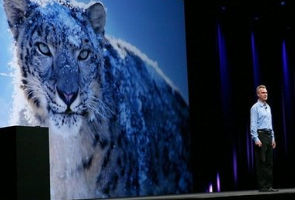 Highlights
A senior executive behind Macintosh computer software is leaving Apple as the culture-changing company rushes into a "post PC Era" in which iPads and iPhones supplant desktop computers.

Bertrand Serlet is ceding his position as senior vice president of Mac Software Engineering to Apple executive Craig Federighi, who will report directly to chief executive Steve Jobs, the company said in a release.

"I've worked with Steve for 22 years and have had an incredible time developing products at both NeXT and Apple," Serlet said in a statement announcing his departure.

"But at this point, I want to focus less on products and more on science."

Federighi has managed the Macintosh operating system team for two years and this summer's release of the latest version of the software, called Lion, should be "seamless," according to Serlet.

While Apple remains devoted to its Macintosh computers, it has grown into a "mobile devices" with its revenue coming increasingly from trend-setting iPad tablet computers and iPhone smartphones.

Jobs has repeatedly proclaimed the onset of a post personal computer era marked by a shift to sophisticated mobile gadgets used to do on the go computing or Internet tasks once performed sitting in front of machines.

Serlet, who holds a doctorate in computer science from the University of Orsay in France, joined Apple in 1997 and has been involved with releases of Tiger, Leopard, and Snow Leopard versions of Macintosh operating software.
Comments

Windows Phone 7 update brings copy-paste
Some readers will get around paywall: NY Times