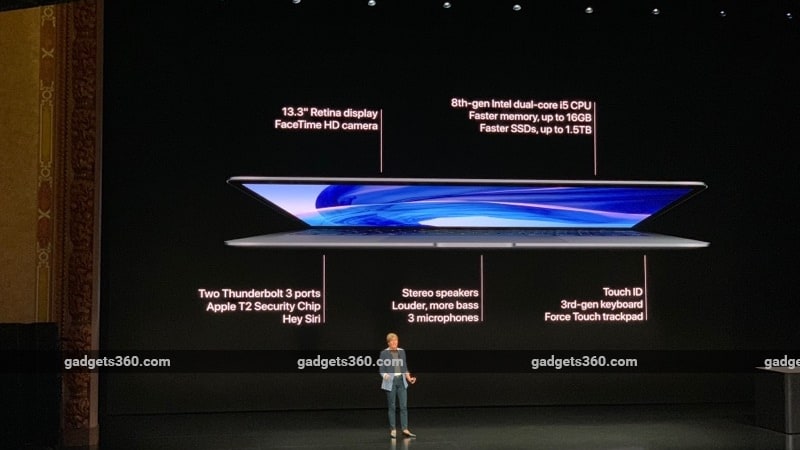 Apple's New York event on Tuesday saw the launch of the new MacBook Air, which hadn't seen a refresh in design since 2010, with the last spec-bump announced at last year's WWDC. The all-new MacBook Air features a Retina display, a first for the series and a feature that's long been anticipated. Another highlight feature is Touch ID, which is enabled by the T2 chip. The Apple T2 chip does a whole lot more than provide a secure enclave for Touch ID, as it also contains the SSD controller and other vital components like an image signal processor.

The all-new MacBook Air will be available in Gold, Silver, and Space Gray colour variants. A $1,399 (roughly Rs. 1,02,900) model was also detailed, which has much the same specifications, except 256GB SSD storage. India price of that model is unknown at this stage.

The new MacBook Air has a backlit keyboard with individual lighting behind each key, based on the third-generation Butterfly mechanism that's said to be 4 times more stable. There is also a brand new Force Touch trackpad, giving it 20 percent larger area apart from pressure-sensing capabilities. The all-new MacBook Air features a 13.3-inch Retina display (2560x1600 pixels) with a 16:10 aspect ratio. This also gives the display 48 percent more colour, and bezels that are 50 percent narrower, than the previous generation.

The company is also touting louder stereo speakers with more bass than before, and it features a three-mic array. There are two USB Type-C Thunderbolt 3 ports on the left side of the all-new MacBook Air, which will give it power, USB , Thunderbolt connectivity, HDMI, VGA, DisplayPort, and eGPU connectivity, depending upon the type of accessory connected at the end.

There is also a 720p FaceTime HD camera on top of the display, and a 3.5mm headphone jack. Wireless connectivity options on the MacBook Air include Wi-Fi 802.11ac and Bluetooth v4.2. It features a 50.3Wh battery that is said to provide up to 12 hours of wireless Web browsing, 13 hours of iTunes movie playback, and 30 days of standby time.

In terms of design, the company says the all-new MacBook occupies 17 percent less volume than the previous generation MacBook Air. Apple also says it now uses custom alloy from excess aluminium, ensuring the laptop is built with 100-percent recycled aluminium, instead of high-grade aluminium in previous generations - which helps reduce the carbon footprint be nearly 50 percent.\

The all-new MacBook Air is also just 15.6mm-thick, which makes it 10 percent thinner than the previous Air. It weighs 1.25kg, down from 1.34kg of the previous generation.

At its event in New York on Tuesday, Apple also announced a refreshed Mac mini as well as brand new iPad Pro models.

Has OnePlus 6T Removed the Best Features of the OnePlus 6?
Mac mini 2018 With Up to 6-Core Processors Launched, Price Starts at Rs. 75,900