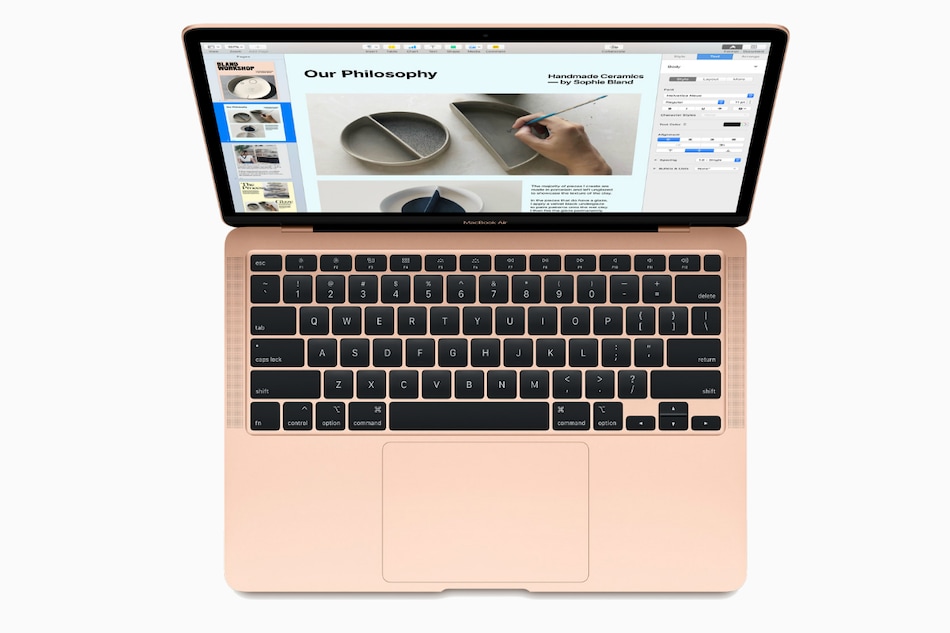 Apple has updated its MacBook Air with a new “Magic Keyboard” to replace the infamous butterfly keyboard seen in earlier models of the laptop. The new MacBook Air, aka MacBook Air 2020, also offers new Intel processors, upgraded Intel Iris Plus graphics, and 256GB base storage unlike the existing 128GB storage. You'll also get upgraded onboard RAM. All this comes along with Apple's claim of an all-day battery life. If you've seen the last-generation MacBook Air model in the past, you won't notice any changes on the chassis front. The MacBook Air 2020 retains the aluminium design that debuted in 2018. Also, there is Touch ID support. Alongside the new MacBook Air, Apple has updated Mac mini with double the storage capacity. It has a US base price of $799 (roughly Rs. 59,320). There is also a new iPad Pro with a LiDAR scanner on board.

The MacBook Air 2020 price in India starts at Rs. 92,990 for the base 256GB storage option. Apple also has other storage models whose pricing is yet to be revealed, though. There are Gold, Silver, and Space Grey colour options. Availability details of the new MacBook Air have not been announced at the moment. In the US, it launched at a base price of $999 (roughly Rs. 74,200).

The USP of the MacBook Air 2020 is the Magic Keyboard that was earlier offered on the 16-inch MacBook Pro. The new keyboard has the same 1mm of key travel that you'll get on the MacBook Pro. There also are inverted-T arrow keys with the “refined scissor” mechanism that is touted to be responsive and offer a quiet typing experience. The keyboard retains backlit keys along with an ambient light sensor.

Apart from the new keyboard, the latest MacBook Air has 10th generation Intel Core processors that are touted to deliver up to two times faster performance over the predecessor. You can choose between 1.1GHz dual-core Intel Core i3 and 1.1GHz quad-core Intel Core i5 options. Additionally, there is Intel Iris Plus graphics along with support for Thunderbolt 3-enabled external graphics processors. Apple claims that the new hardware on the MacBook Air enables up to 80 percent faster graphics performance over the last-generation model.

The MacBook Air 2020 retains the earlier 13-inch Retina display that has an IPS panel with 2560x1600 pixels resolution and 227ppi of pixel density. The display panel has a 16:10 aspect ratio and is powered by True Tone technology.

Apple has listed 256GB and 512GB of PCIe-based SSD storage options on its official site. However, it does mention in the press release that it would offer up to 2TB SSD -- double the previous maximum storage capacity. There is also 8GB of LPDDR4X RAM clocked at 3,733MHz.

The new MacBook Air also includes the Apple T2 Security Chip that is touted to check that software loaded during the boot process hasn't been tampered with and offers data encryption on-the-move. There is also Touch ID support for an enhanced login experience.

Similar to previous MacBook Air, the new model also has a three-mic array and Force Touch trackpad. The device also has Thunderbolt 3 ports for data transfer, charging, and video output. Further it supports up to a 6K external display and has built-in stereo speakers along with wide stereo sound production.

There is a built-in 49.9-watt-hour lithium-polymer battery that is touted to deliver up to 11 hours of wireless Web or up to 30 days of standby time on a single charge. Furthermore, the new model weighs 1.29 kilograms — slightly over 1.25 kilograms.