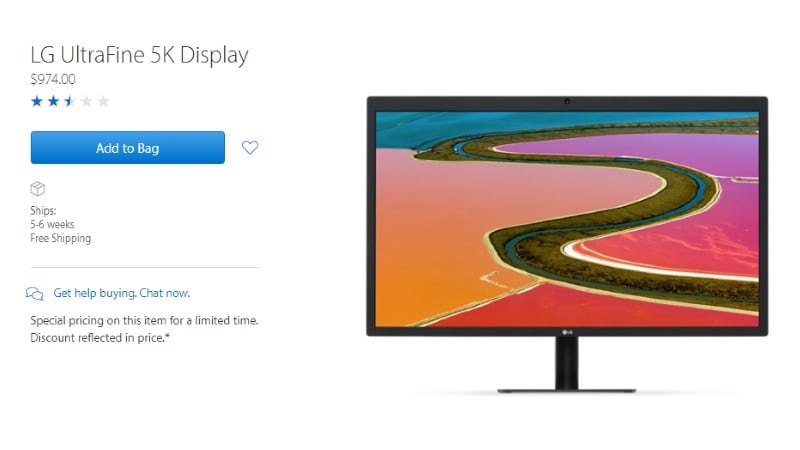 Apple has delayed the shipments of LG UltraFine 5K Display units as LG continues to work on the enhanced shielding fix, announced by the company recently, to resolve the issue where the display was facing problems when placed near Wi-Fi routers. As per the company's website, the shipment of the high-density displays will now take around 5 to 6 weeks while the 4K LG UltraFine displays still take just 2 business days for shipping (with option for next day shipping available for extra $34).

Prior to the change in shipping dates, the displays were shipping in around two weeks and even three to five days for a particular time period in January, notes MacRumours in its report. The report claims the delay in shipments can be attributed to the issue that was causing the display to flicker, black out, and even freeze the connected computer when a Wi-Fi router is kept too close to it. Even though the display worked fine with the router kept at a distance of 2 metres or more, it started causing the aforementioned issues when kept closer.

Earlier this month, LG apologised to customers for the inconvenienced caused due to the issue and said that it could be resolved with extra shielding. It said that all LG UltraFine 27-inch 5K displays manufactured after February 2017 will be fitted with enhanced shielding. As for owners of the monitor, LG says existing UltraFine 5K Displays can be retrofit with the enhanced shielding.

Notably, even though the user manual for the monitor does warn the users that display should be installed "where no Electromagnetic Interference occurs," it does not specify anything about routers.

To recall, Apple first showcased LG's UltraFine 5K Display monitor when the company launched its new range of MacBooks last year in October and claimed that the display worked great in sync with its new laptop lineup.