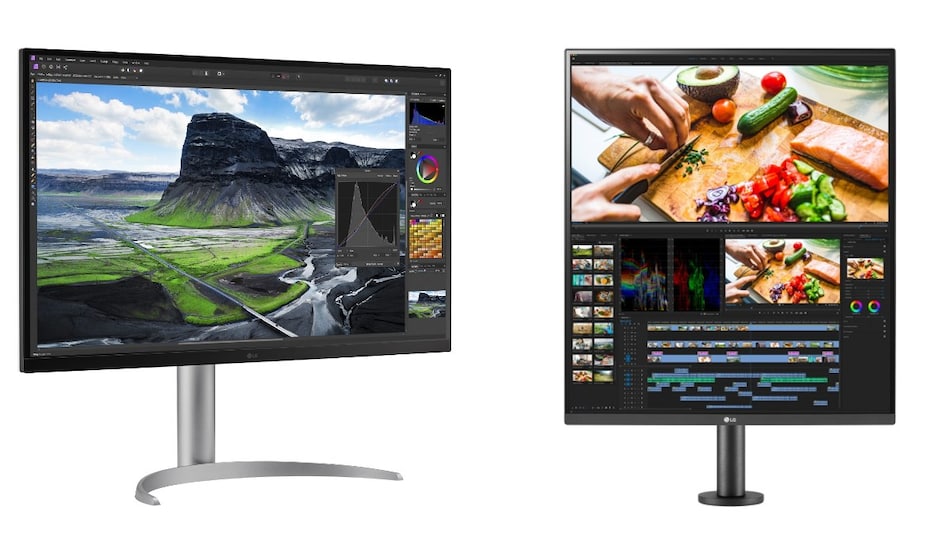 LG DualUp Monitor and LG UltraFine Display were unveiled on Wednesday. These monitors will make their official debut at CES 2022 at LG's virtual press conference on January 4 at 8:00 PST (9:30 pm IST), the South Korean company said. The premium monitors are aimed at creative professionals and programmers. Recently, LG announced its new UltraFine OLED Pro monitors in various sizes for professionals as well as a new lineup of audio products, including 9.1.5-channel S95QR soundbar with 810W output and IMAX Enhanced Audio.

As announced by LG, the DualUp Monitor comes with model number 28MQ780 and is offered for professionals who are into multitasking work such as content creation and coding. It has a 27.6-inch screen size. The monitor features a Square Double QHD (2,560x2,880 pixels) resolution and has a vertical split view function. It features a Nano IPS display with 16:18 aspect ratio, 98 percent coverage of the DCI-P3 colour gamut, offers 300 nits of peak brightness, and 1,000:1 contrast ratio.

Other display features of LG DualUp Monitor include HDR10, 5ms response time, and a three-side borderless design. It comes with an Ergo second generation stand which clamps securely to most desks and tables. Connectivity options on the monitor include two HDMI, one DisplayPort, and three USB ports. There are two 7W MaxxAudio stereo speakers, onscreen controls, and auto brightness features as well.

Other features of LG UltraFine Display include Color Auto Configuration, AMD FreeSync Technology, three-side borderless design, and two 5W MaxxAudio stereo speakers. There is also a detachable Auto Self-Calibration sensor. LG says that the calibration can be scheduled via LG's intuitive software. For connectivity, the monitor comes with two HDMI, one DisplayPort, and three USB ports.