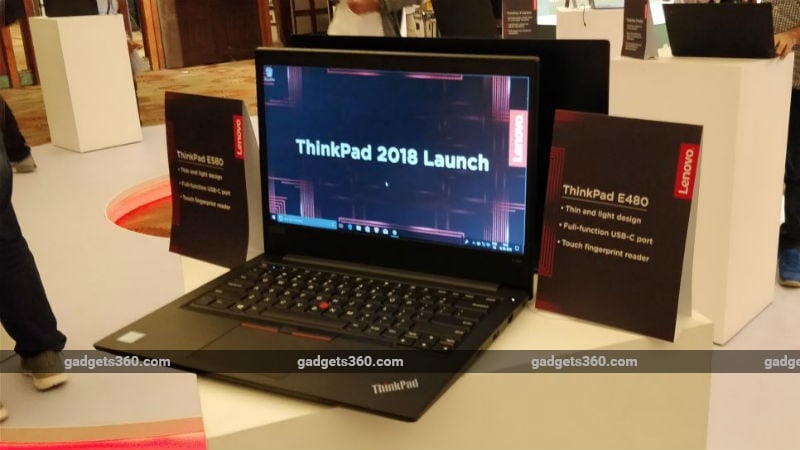 As unveiled at CES 2018 in Barcelona, the ThinkPad X1 Carbon is touted to be the "world's lightest 14-inch business laptop" with a lightweight chassis that is designed using advanced carbon fibre composite. The notebook comes in display options ranging from full-HD IPS to full-HD IPS with touch, and WQHD IPS to WQHD IPS HDR with Dolby Vision. There are eighth-generation Core processors (up to Intel Core i7 with vPro), coupled with Intel UHD 620 graphics and up to 16GB of LPDDR3 RAM. The notebook also has up to 1TB of PCIe SSD storage. Lenovo has provided a ThinkShutter Camera Privacy physical webcam cover on top of a 720p HD camera, and an IR camera is available with eye-tracking and facial recognition features. In terms of connectivity, the ThinkPad X1 Carbon has Wi-Fi 802.11ac, Bluetooth v4.2, two USB 3.0, two Intel Thunderbolt 3 ports, a headphone and microphone combo jack, 3-in-1 microSD card readers, HDMI port, and a docking connectivity for native Ethernet support. There is a 57Wh integrated battery that is rated to deliver up to 19.3 hours of usage and supports RapidCharge technology.

After the top-end ThinkPad X1 models, Lenovo has the ThinkPad X280 and ThinkPad X380 Yoga. The ThinkPad X280 features a 12.5-inch display that comes with options including HD, TN, FHD, IPS, and FHD IPS touch. Under the hood, there is the up to Intel Core i7 with vPro, alongside up to 16GB DDR4 RAM and 1TB PCIe SSD. The notebook has Dolby Premium Audio and a 720p HD camera - with an option for IR Camera and ThinkShutter cover. On the connectivity side, the ThinkPad X280 has Wi-Fi 802.11ac, Bluetooth v4.1, two USB 3.0, a USB Type-C, Intel Thunderbolt 3, HDMI, RJ45 connector, and a headphone and microphone combo jack. The X280 is 20 percent lighter at 2.5 pounds and 15 percent thinner (17.4mm) compared to its predecessor. There is a built-in battery that lasts for up to 16.6 hours, as claimed by the company.

Coming to the Lenovo ThinkPad T480, ThinkPad T480s, and ThinkPad T580, all these models have optional discrete graphics power and extended battery options to deliver up to 27 hours of power. The ThinkPad T480 in the new range has a 14-inch display in HD TN and FHD IPS touch options. The notebook comes with up to Intel Core i7 processors with vPro, paired with Intel UHD 620 or Nvidia GeForce MX150 graphics and up to 32GB 2DIMM 2400MHz DDR4 RAM. Customers have also been provided with a premium storage option of up to 1TB OPAL 2 M.2 SSD. The ThinkPad T480s and ThinkPad T580, on the other side, have 15-inch display panels with options such as HD TN, FHD IPS, and FHD IPS touch. The ThinkPad T480s has up to 24GB of DDR4 RAM, 1TB SSD PCIe SSD, Intel UHD Graphics 620 or Nvidia GeForce MX150. In contrast, the ThinkPad T580 has up to 32GB 2DIMM DDR4 RAM and up to 2TB HDD or 1TB PCIe SSD. All three T series ThinkPad notebooks have Wi-Fi 802.11ac, Bluetooth v4.1, Intel Thunderbolt 3, USB Type-C, USB 3.0, HDMI, headphone and microphone combo jack, and a 4-in-1 microSD card reader.

"The digital transformation has catapulted businesses to transform their workforce. The latest Think portfolio is in line with the changes that new technologies have brought about. With the new Intel processor coupled with the legendary attributes of our Think product, the latest thin and light range is well equipped for the mobile workforce of today and tomorrow," said Rohit Midha, Director, Commercial Named Account, Lenovo India, in a statement, while announcing the new range.

Drake Will Rap About Fortnite If Epic Makes a Hotline Bling Emote for the Game
Nokia 6 (2018), Nokia 7 Plus Android 8.1 Oreo Update Now Rolling Out in India