All four Lenovo ThinkBook models will debut in the first quarter of 2021. 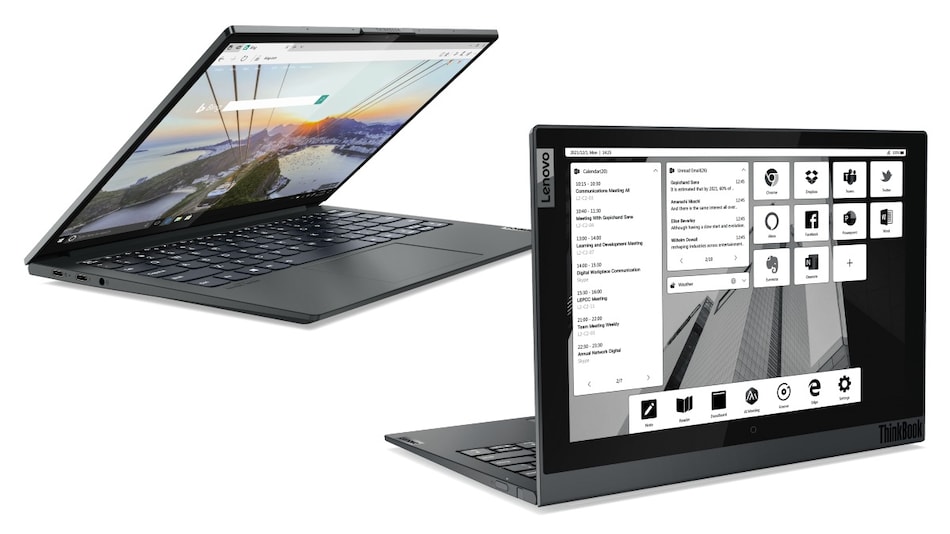 Lenovo has expanded its portfolio of laptops with the launch of ThinkBook 13x i, ThinkBook 14p Gen 2, and ThinkBook 16p Gen 2 at CES 2021. The new ThinkBook laptops are designed for business professionals with a tall 16:10 aspect ratio. Select models in the new series come with Dolby Vision HDR and Dolby Atmos support. In addition to three new models, Lenovo has launched the ThinkBook Plus Gen 2 i laptop that features an E Ink display.

The Lenovo ThinkBook 13x i features a 13.3-inch WQXGA (2,560x1,600 pixels) IPS display with 400 nits of peak brightness and Dolby Vision support. The display comes with touch support and is equipped with a 180-degree flat hinge design. Under the hood, there is an option of up to 11th-generation Intel Core i7 processor, along with up to 16GB of LPDDR4X RAM and up to 1TB M.2 PCIe Gen 4 SSD. The laptop comes with regular connectivity options that include two Thunderbolt 4 ports, Wi-Fi 6, and Bluetooth v5.0.

Lenovo has offered Dolby Atmos support on the ThinkBook 13x i. There is also a 53W battery. The laptop is based on Intel Evo platform that is meant for slim yet powerful Windows machines. The ThinkBook 13x i comes in Cloud Gray and Storm Gray colour options. It laptop comes with a thin 12.9mm chassis and weighs less than 1.2 kilograms.

Unlike the ThinkBook 13x i, the Lenovo ThinkBook 14p Gen 2 is based on the latest AMD Ryzen mobile processors (with up to AMD Ryzen 9 5000 H Series). The laptop is coupled with up to 32GB DDR4 RAM and up to 1TB of PCIe SSD. It features up to 14-inch 2.8K OLED display with 300 nits of peak brightness and VESA DisplayHDR True Black standard. In terms of connectivity, the laptop includes USB Type-C, HDMI 2.0, Wi-Fi 6, and Bluetooth v5.0.

The Lenovo ThinkBook 14p Gen 2 comes in 16.9mm thickness and weighs less than 1.4 kilograms. The laptop also includes a fingerprint reader and an IR camera along with Windows Hello support.

The Lenovo ThinkBook 16p Gen 2 comes with a 16-inch 2.5K IPS display. It is also powered by the latest AMD Ryzen mobile processors, along with up to next-generation Nvidia GeForce RTX discrete graphics. The laptop can also be configured with a pre-calibrated display with X-Rite Pantone certification. The laptop is 19.9mm of thick and weighs 2 kilograms.

Lenovo ThinkBook Plus Gen 2 i specifications

The Lenovo ThinkBook Plus Gen 2 i is quite similar to the ThinkBook 13 x i, though it features a 12-inch WQXGA (2,560x1,600 pixels) E-Ink secondary display that supports touch inputs, along with a primary 13.3-inch WQXGA IPS display with a screen-to-body ratio of 90 percent. The laptop comes with a new e-Ink User Interface (UI). It is a successor to the Lenovo ThinkBook Plus that launched at CES 2020 and debuted in India in September last year.

Other key specifications of the ThinkBook Plus Gen 2 i include up to 11th-generation Intel Core i7 processor, 16GB LPDDR4X RAM, and up to 1TB M.2 PCIe Gen4 SSD. The laptop is 13.9mm thick and weighs less than 1.3 kilograms.

Lenovo ThinkBook Plus Gen 2 i Laptop

Oppo A93 5G Gets Listed on Telecom Site; Shows Specifications, Pricing Ahead of Possible Launch