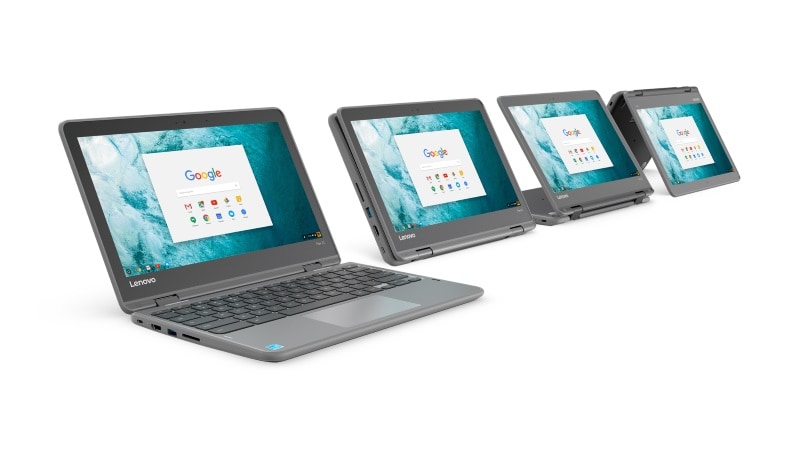 Lenovo on Wednesday launched its 2-in-1 convertible Flex 11 Chromebook. The Flex 11 has been pitched by the company as a device optimised for entertainment and productivity, and bears a touchscreen that provides improved Android app support. Lenovo says that Flex 11 was designed "with Android apps from the Google Play store in mind." The laptop comes with a 360-degree hinge that provides it with flexibility and ability to shift to different modes including watch, tent, laptop, and tablet according to user's needs. The pricing for the laptop starts from $279 (roughly Rs. 18,000), and it will be made available by the company later this month.

The Lenovo's Flex 11 runs ChromeOS, and while Android app support is the most touted feature, support will be coming soon to the laptop, as per the company. It sports a 11.6-inch (768x1366 pixels) touchscreen IPS display and is powered by a quad-core 2.1GHz ARM processor. The laptop packs 4GB of RAM and comes with 32GB of built-in storage. In terms of connectivity options, Flex 11 offers options including HDMI, USB 3.0, an audio jack, USB Type-C and an SD card slot.

As per Lenovo's claims, the Flex 11 provides up to 10 hours of battery life. The Flex 11 weighs less than 1.36kg and comes with a drop-resistant design, which allows it to withstand falls from up to 2.4 feet, as per company's claims. The company says that the laptop also features a water-resistant keyboard that can handle spills of up to 330ml.

"Skype, Asphalt 8, Evernote, and Slack run seamlessly on this powerful ARM processor as well as all touch applications, interactive games, high-definition video, and more, without compromising on performance," Lenovo said in its release.