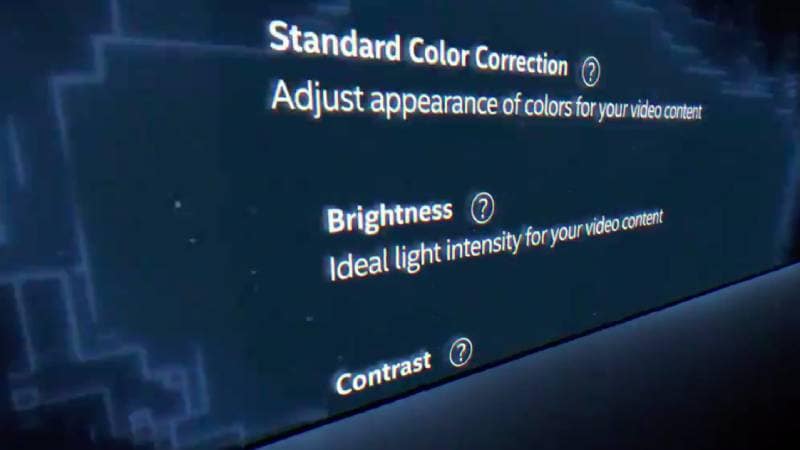 Intel is amping up the publicity around its upcoming discrete GPUs and more powerful Gen11 integrated GPUs with a series of social media teasers and live events. The company has embarked on a campaign that it is calling The Odyssey, which will include online communications as well as ground events aimed at creating awareness among gamers and enthusiasts, and conducting market research that can be used as products and services are being developed. The latest snippet of information that Intel has released is a video showing parts of a new user interface for a GPU control panel.

The teaser reveals the modern-looking UI of the tool, with an Intel logo and what appears to be a sidebar for navigation to various subsections of the tool. These headers include Display, Video, System, Support, and Preferences.  We also get a sneak peak of how a user's games will be shown, allowing users to tweak individual settings for them. The teaser ends with the text "Coming this month".

Nvidia's Control Panel and GeForce Experience, and AMD's Radeon Settings GPU tools generally allow users to tweak performance, update firmware, set up profiles for specific games, and control features such as frame rate limiting, 3D output, and colour profiles. We can expect more to be revealed soon, though Intel is likely to stretch the process out to build hype.

Our new control panel is coming soon! We can't wait to hear what you think of the new interface. #JoinTheOdyssey pic.twitter.com/OGzX2BwtpM

Solid details are likely to be announced at the first Intel Odyssey community event which is to be held in San Francisco on March 20 at the annual Gaming Developers Conference. Those who sign up to be a part of the Odyssey programme are being promised early access to news as well as beta access to hardware or software, interactions with elite gamers and developers, exclusive offers, private experiences, and giveaways.

This is more than a journey. It is an Odyssey to improve visual computing experiences. But we can't do it alone. We invite our community to join us. https://t.co/aj1vaq79vr #JoinTheOdyssey pic.twitter.com/s0uQcChWJ6

Intel has promised to launch a discrete graphics card in 2020, but its high-performance integrated Gen11 GPU should begin reaching customers this year with the company's first 10nm CPUs that will ship in volume. Intel's renewed graphics effort has been in the works for a while and gained major attention when the company hired AMD's former head of graphics, Raja Koduri. Since then, Intel has also hired AMD's senior chip engineer Jim Keller as well as its PR head Chris Hook, and also tech vlogger Chris Pirillo for the graphics team.

Intel has also snapped up the team of Hyderabad-based AI vision startup Ineda. In an unusual move, Intel recently released a flashy video online urging industry professionals to apply for jobs in its graphics division. The new hardware will not only target gamers, but also AI and big data applications in data centres.