Intel's 3Q sings but computer market out of tune 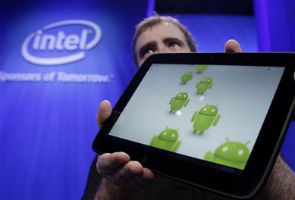 Nonetheless, even as the numbers are encouraging for Intel, they're unlikely to reflect a meaningful change in the underlying dynamics that threaten to keep computer demand sluggish into the foreseeable future.

Debt worries, stubborn unemployment and the popularity of smartphones and tablet computers have depressed the market.

Consumers are hanging on to their existing PCs longer. Many corporations are doing the same. The U.S. and European markets are particularly weak and have in fact contracted - a rare and troubling development for markets that had been mostly steadily expanding for decades.

Numbers released last week by market researchers IDC and Gartner Inc. showed that PC shipments worldwide grew in the third quarter but at a pace that was slower than expected.

Hard drive makers Seagate Technology PLC and Western Digital Corp. have also warned that the flooding in Thailand is hurting their ability to meet demand for the critical PC components they make.

The market for computer servers has generally been stronger. Companies have shown a greater willingness to upgrade their technology than resume extensive hiring. But there are some signs of softness there as well. On Monday, IBM Corp. reported weaker-than-expected growth in its hardware division, which sells servers and mainframes to corporations.

In an interview, Intel's Chief Financial Officer Stacy Smith described European markets as "pretty subdued" and said demand in the U.S. during the quarter was merely "OK."

Emerging markets were strong, however, as was corporate spending on Intel chips, he said. Smith cautioned there was uncertainty heading into the fourth quarter, but emphasized that spending in emerging markets and by corporations remains strong.

Smith said on a conference call with analysts that Intel may have taken some market share from Advanced Micro Devices Inc., Intel's longtime rival. Last month, AMD cut its third quarter guidance because of manufacturing problems with an important new chip. It marked a troubling start for AMD's new CEO Rory Read, who was hired from Lenovo Group. AMD reports results Oct. 27.