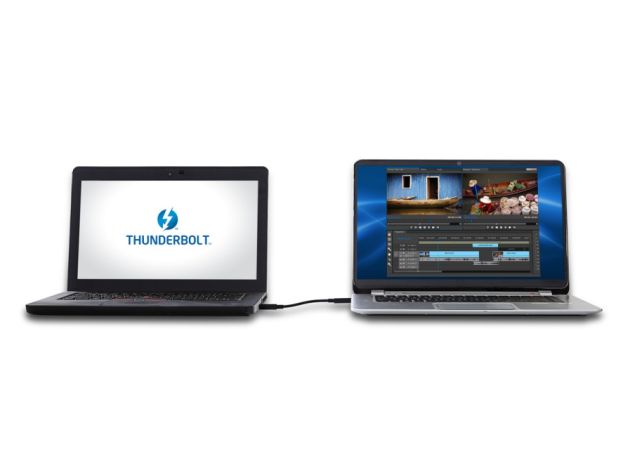 Intel on Monday announced at the National Association of Broadcasters (NAB) show that it is increasing the networking capability of Thunderbolt 2 to enable 10Gbps throughput between two computers. It does this by emulating an Ethernet connection environment.

Thunderbolt 2's new networking feature is already available on compatible Mac computers and Intel plans to release a PC driver soon to connect two PCs together or even a PC to a Mac. This also allows for backup or upgrade across two computers.

While the capability is already available on OS X Mavericks machines, Intel will be releasing a driver for Windows machines later this quarter.

There are some innovative new products supporting the Thunderbolt 2 interface at NAB 2014. Some of them, like LG'S 34-inch IPS 21:9 UltraWide (Model UM95) monitor with Thunderbolt 2 for Mac and PC, and the CION professional camera capable of shooting at 4K/Ultra HD and 2K/HD resolutions, caught our fancy.

NDTV Gadgets reported when Intel formally announced next generation Thunderbolt 2 interface capable of 20Gbps speeds at last year's NAB. This interface allows for simultaneous 4K video transfer which is advantageous for professional video editors working with such footage. We mentioned how Intel plans to ramp up production in 2014 and it is interesting to note that number of new devices at display at NAB that support the Thunderbolt 2 interface.