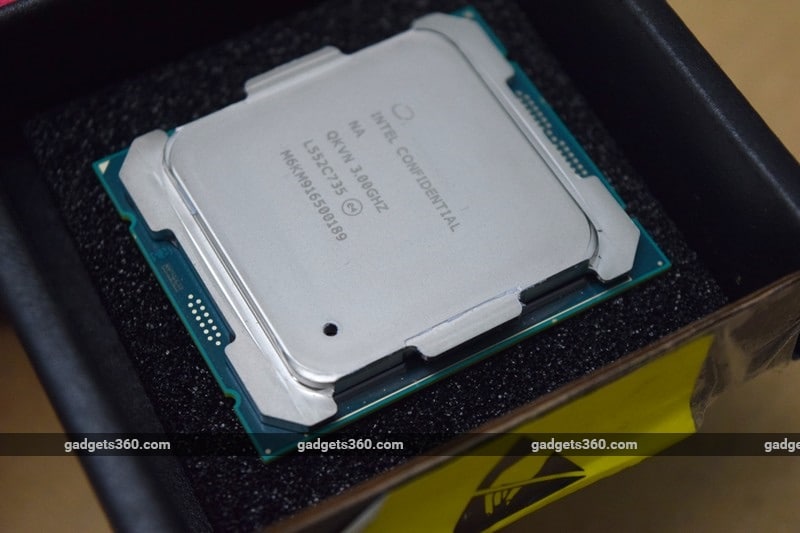 Intel is feeling the pressure of AMD's successful Ryzen CPU launch and is bringing its own product refreshes forward, according to a report from Taiwanese supply chain tracker Digitimes. The site claims that Intel will launch the high-end Skylake-X and Kaby Lake-X processors in late May rather than the end of July, and the mainstream Coffee Lake series in August rather than January next year.

The report lines up with previous leaks about changes to Intel's roadmaps. Skylake-X and Kaby Lake-X will supposedly launch together under a common platform named Basin Falls, replacing the current Broadwell-E platform which is architecturally two generations behind the mainstream Kaby Lake lineup. In our review of the Broadwell-E-based Intel Core i7-6950X, we saw that the 10-core behemoth struggled to keep up with a Kaby Lake-based Core i7-6700K in some situations even though it cost several times as much.

Combining two generations would help Intel bring its high-end desktop (HEDT) CPUs in line with the rest of its portfolio. It is not known how Intel will position Skylake-X and Kaby Lake-X against each other, but Digitimes also says that they will share a common socket with at least 2,000 pads and a platform controller called X299. Skylake-X parts could have six to twelve physical cores and have 140W TDP ratings, while Kaby Lake-X might be restricted to four cores at 112W. The products could be announced at the annual Computex trade show in Taipei or the E3 gaming show in Los Angeles in the first week of June.

Intel will be hoping to re-establish its dominance which has been threatened by AMD's current highest-end CPU, the octa-core Ryzen R7 1800X. While Ryzen 7 is competitive with Broadwell-E at a much lower price, AMD is also rumoured to be working on its own high-end platform featuring models with as many as 16 physical cores.

Later in the year, Intel will reportedly bring out its desktop Coffee Lake CPUs under the 8th Generation Core brand. These will still be manufactured on the 14nm process, becoming the fourth 14nm generation. Intel famously retired its "tick tock" strategy of alternating biannual architecture and process changes with the Kaby Lake generation, adding a third "optimisation" step. However, the 10nm architecture codenamed Cannonlake will now either be delayed even further, or will be used only for chips aimed at thin laptops and tablets and coexist with Coffee Lake chips.

Intel could also reconfigure its Core i3, i5 and i7 product tiers which are currently differentiated by core counts and Hyper-Threading. With AMD offering as many as six cores and twelve threads at the same price as a non-Hyper-Threaded quad core Core i5 CPUs, Intel might have to fight back by increasing core counts for the first time since the naming scheme debuted. Earlier this year, Intel began tweaking its hierarchy by with the release of the first overclockable Core i3 CPU and a Pentium-tier chip with Hyper-Threading.

The world's largest chipmaker is facing renewed competition from AMD and ARM vendors at a time when it is struggling to reinvent itself for the post-PC age. Earlier this week, it announced the cancellation of its long-running annual Intel Developer's Forum conference, where thousands of product developers, innovators, analysts and journalists usually gather to hear about the company's latest products and roadmaps directly from top management and engineers.