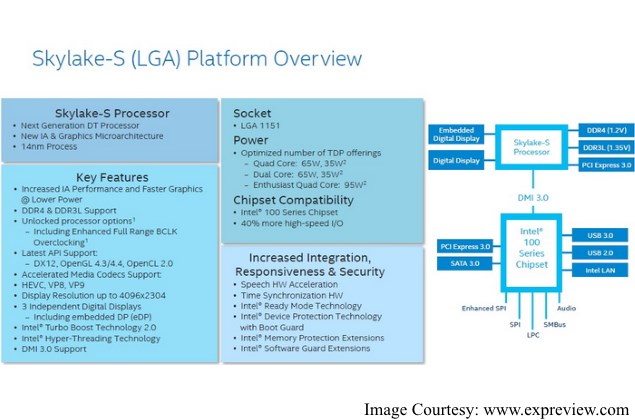 Chinese-language site EXPreview has published details of Intel's upcoming Skylake generation of CPUs and their accompanying platform controllers, based on apparently leaked internal presentation slides from Intel. While the current Broadwell generation is a 14nm die shrink of the previous Haswell architecture, its successor, Skylake will introduce a new architecture on the now-proven 14nm process and is expected to hit markets by the end of this year.

Desktop versions of the chips intended for installation in socketed motherboards are apparently known as Skylake-S. A new socket, LGA1151, will break compatibility with existing motherboards. A new three-digit naming scheme for chipsets is also needed, as two-digit numbers have been exhausted with the 9X series.

The big news on the processor front is support for DDR4 RAM as well as DDR3 (or possibly only low-power DDR3L for some form factors, based on the slides). This will mark a push into mainstream territory for the new high-speed standard, which could help spur volume production and bring prices down.

The new architecture includes a revamped graphics component with support for DirectX 12, OpenCL 2.0 and OpenGL 4.4 as well as accelerated encoding/decoding for the modern VP9, VP8 and HEVC video codecs. The leak does not include information about previously speculated embedded DRAM caches, such as used by Intel's top-end processors with integrated Iris Pro graphics.

Power is optimised, with the mainstream TDP dropping from 84W to 65W. Low-power dual- and quad-core models will be available with 35W TDPs, while enthusiast quad-core parts will have a 95W TDP rating. Unlocked models will allow for overclocking of the base frequency, which is in line with Intel's recent push to reinvigorate the enthusiast desktop market.

The 100-series chipsets promise 40 percent more I/O bandwidth thanks to wider use of the PCI-express 3.0 standard and more flexible allocation options. M.2 and SATA Express SSDs will be able to tap four PCIe lanes each for improved bandwidth.

Separate business-oriented versions are presumably also in the works. With the Broadwell generation still rolling out across product categories, it is unlikely that Skylake will ship before the end of this year.