The showcase was held the day after Intel's Computex 2019 keynote announcements. 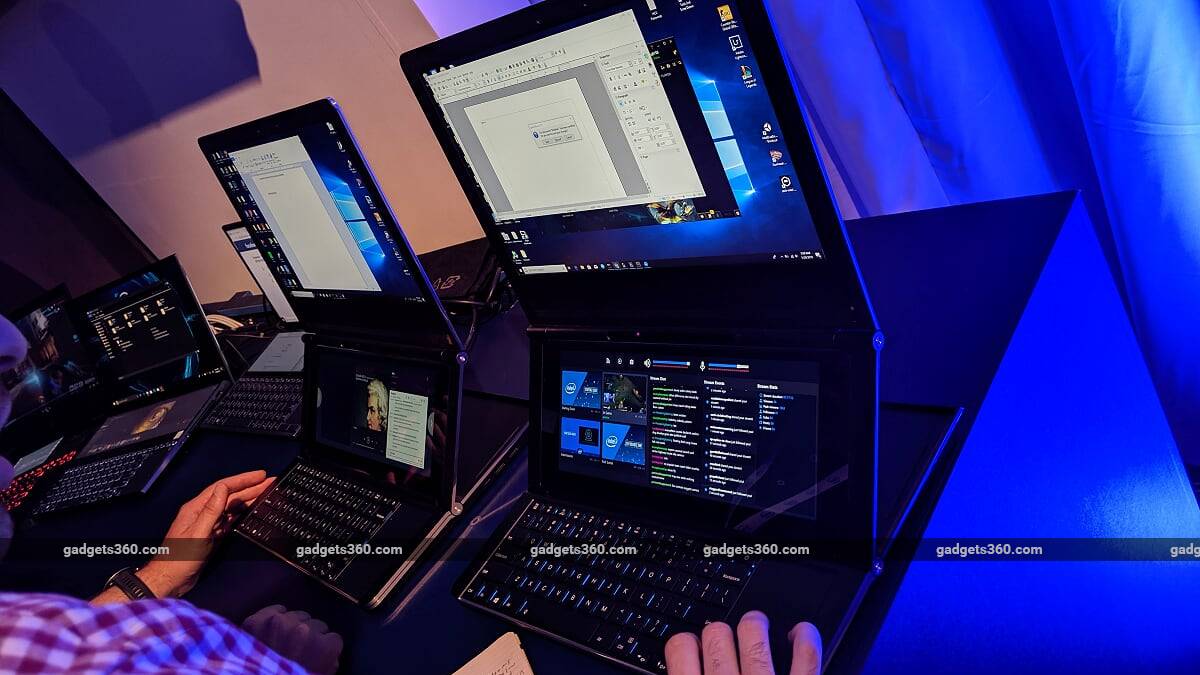 Just a day after making multiple announcements at its Computex 2019 keynote, Intel has unveiled even more products and future plans. At a private event along the sidelines of the world's biggest PC industry trade show in Taipei, Intel showed off several new experimental form factors aimed at implementing multiple displays in a laptop, and also launched its new NUC Elements series of tiny compute modules as well as a new model in its Optane Memory product. Some of the products on display were only prototypes designed to show off Intel's ideas for OEMs to implement in their own way, while  others will be products that Intel itself sells directly to consumers.

The 'Honeycomb Glacier' form factor imagines a large laptop with a secondary hinge that allows the main display to be raised to eye level, while a second display above the keyboard is then also raised and inclined towards the user. The device can be opened and used much like the Asus ZenBook Pro Duo, also announced at Computex this week. However, using the second hinge lifts both displays.

The concept device on display was fully functional, and integrated features such as eye tracking to automatically activate whichever window the user is looking at, across both displays. This way, a user can multitask and switch between programs without moving his or her hands off the keyboard and trackpad. Users can even glance at a voice assistant app and it will automatically begin listening for commands.

The raised secondary display also allows for additional cooling for the prototype's internal components. The display was not full-width, like the one on Asus's new ZenBook models. A physical mechanism holds the two displays upright and users need to press a button to disengage it in order to fold them back down. It is unknown at this point whether any manufacturers will bring such a product to market.

Another concept device uses a full-sized second display instead of a keyboard and trackpad. This prototype device was covered in fabric and was designed to feel like a folio. A stiff hinge lets the device stand like any ordinary laptop, and it can be opened at varying angles. The two displays can be used for multitasking, reading, or touch input.

While the lower half can display a keyboard and trackpad, acting like a standard laptop, Intel also imagines this concept with a physical Bluetooth wireless keyboard for productivity. This keyboard is so slim that it can be placed on top of the lower display for comfort, or carried around between the two screens when the device is folded.

A third concept imagines a small "ambient" display on the lower front lip of a laptop, curving downwards from the trackpad. This would allow users to interact with apps and see essential information such as calendar appointments and alerts when the laptop is closed. Intel also demonstrated this concept showing Spotify music playback controls and responding to Alexa voice commands while closed.

In addition to these concepts, Intel showed off its new NUC Elements device, which builds on the now-discontinued Compute Card product line. Palm-sized NUC Elements modules will contain a CPU with integrated graphics, plus memory and storage. They can be swapped in and out of docks, but aren't designed to be externally accessible or portable.

Intel says it will sell NUC Elements devices itself, just like its existing NUC PCs. There will be accessories such as a docking chassis, but exact details will only be known later this year. Multiple variants will be offered with different CPU, memory and storage configurations, including Intel vPro options, but pricing remains to be seen.

Intel imagines that developers will be able to use these modules to prototype their designs without investing as much as they would have to in multiple fully-built devices. They can also be deployed in kiosks and embedded applications. Users will be able to upgrade their devices themselves, or take them in to a store to have them upgraded with new modules at any point in the future after purchasing them. NUC Elements products will go on sale in the first half of 2020.

Finally, Intel also announced the new Optane Memory M15 which is said to be improved in terms of power efficiency and performance compared to the previous generation. It is intended to be paired with 9th Gen Core CPUs across a variety of PC form factors. Details such as availability and capacity options have not yet been announced.

Teenager Who Hacked Apple to Get a Job Pleads Guilty, Let Off Without Conviction
'World's Most Dangerous Laptop' Aka the Persistence of Chaos Sold for $1.3 Million