These CPUs will power a new generation of ultraportable laptops. 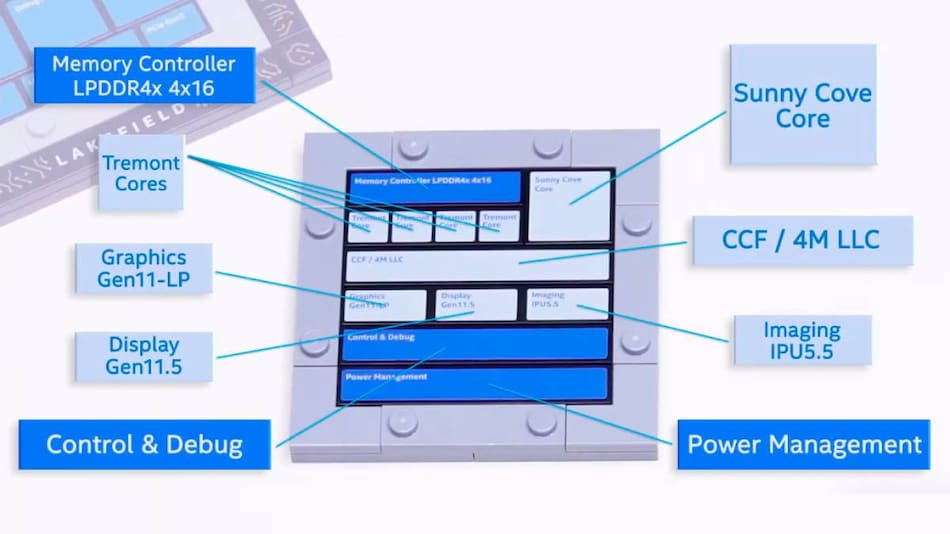 Intel has announced its first hybrid CPUs that combine its high-power and low-power architectures, usually used in the separate Core and Atom product lines. The new 'Lakefield' CPU series models are targeted at ultra-portable laptops and new form factors including dual-screen and folding-screen models. Two CPUs have been announced, the new Intel Core i5-L16G7 and Core i3-L13G4, each with one high-power core and four high-efficiency cores. They will first be seen in Lenovo's ThinkPad X1 Fold and Samsung Galaxy Book S. This is also the first consumer application of Intel's Feveros 3D stacking CPU construction technology.

Intel said in its announcement that the combination of these new developments allows for a CPU that is physically 56 percent smaller than current ones, leading to smaller motherboards, greater flexibility in PC design, and of course smaller and lighter devices. The chips consume as little as 2.5mW of power in standby, which Intel says is a 91 percent reduction compared to an 8th Gen Core i7 Y-series mobile CPU.

The new hybrid CPUs will be part of Intel's 10th Gen Core series alongside existing parts based on the Ice Lake and Comet Lake architectures. They will be differentiated by their numbering scheme, which shows the relative power of each CPU and its integrated graphics capabilities, mirroring the current Ice Lake laptop family. They will be officially described as "Intel Core processors with Intel Hybrid Technology".

Both new models have 7W TDP ratings and 4MB of cache memory. The Core i5-L16G7 has a base speed of 1.4GHz across all cores with single-core (the Sunny Cove core only) and all-core boost speeds of 3GHz and 1.8GHz respectively. It features 64 Gen11 graphics execution units. The Core i3-L13G4 runs at 800MHz with boost speeds of 2.8GHz and 1.3GHz respectively, and has 48 graphics execution units.

Intel promises a huge leap in graphics performance for the 7W TDP CPU segment. The Lakefield chips are also said to be the first with dual graphics pipelines, specifically optimised for multi-screen devices. On-chip AI inference extensions are also supported, like with Ice Lake On the platform level, there is support for Gigabit-class Wi-Fi 6 and LTE solutions and LPDDR4X-4267 RAM.

The Foveros 3D stacking technique allowed Intel to develop this modular design, leveraging blocks of technology with different architectures. Lakefield combines 10nm cores with larger IO components based on older processes, much like AMD's current chiplet strategy with its Zen 2 architecture. This could help Intel deal with its ongoing 10nm manufacturing difficulties.

The Lakefield chips measure 12mm square and 1mm thick. The concept of combining heterogenous high-power and low-energy CPU cores is common in the ARM-based mobile CPU space, with the arrangement commonly referred to as "big.Little". Intel says that the Windows 10 scheduler is fully capable of assigning tasks to an appropriate core using "hardware-guided" scheduling.

Samsung's Galaxy Book S will be the first laptop featuring the Lakefield CPU when it goes on sale in some parts of the world later this month. Lenovo has also announced its ThinkPad X1 Fold, which is expected to ship before the end of 2020. Microsoft and Intel had previously announced the dual-screen Surface Neo, which is now reportedly delayed or cancelled, and has not been mentioned in today's announcement. Intel had also shown off a concept folding laptop based on a Lakefield CPU at CES 2020.