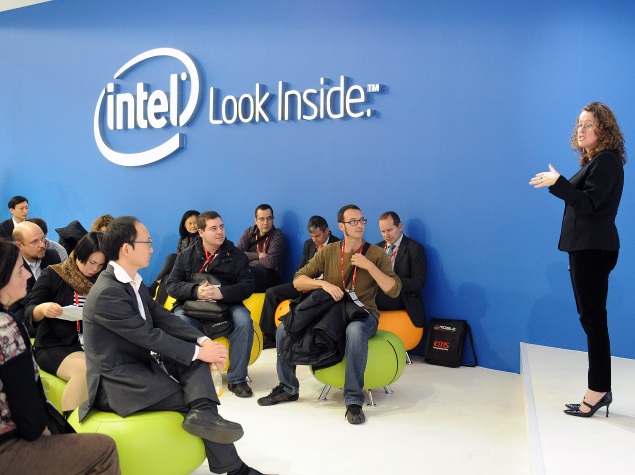 Chipmaker Intel Corp forecast revenue and gross margins for this quarter that disappointed investors, sending its shares down 2.7 percent in extended trading.

Revenue from its mainstay PC business fell about 3 percent to $8.9 billion in the fourth quarter from the prior quarter, raising doubts about a long-anticipated recovery of the personal computer business.

Global PC shipments fell 2.4 percent in the fourth quarter of 2014, according to research firm IDC, capping three years of declines.

That was not as bad as expected, raising hopes among some investors that the PC market is starting to stabilize, but Intel did not deliver any spirited talk about a recovery on Thursday.

"In 2015 we're predicting kind of flat, nothing spectacular but stable, is how I would call it," Intel Chief Financial Officer Stacy Smith told Reuters in an interview.

Despite the tepid PC market, Intel is targeting revenue growth this year in the "mid-single digit percentage points", which Smith said would be helped by faster growth in providing chips for data centers and Internet-connected gadgets.

Optimism over a PC recovery has propelled Intel's stock up 16 percent in the past three months, compared with a 7 percent gain for the S&P 500, to levels not seen since 2001.

In the light of that, Wall Street was hoping for more encouraging figures.

"PC was weaker in the fourth quarter than we were expecting," Rolland added.

The chipmaker forecast first-quarter revenue of $13.76 billion, plus or minus $500 million, and gross margins of about 60 percent, far below the 65.4 percent it reported in the fourth quarter.

Analysts on average were expecting revenue of $13.77 billion, according to Thomson Reuters I/B/E/S.

Analysts on average had expected a profit of 66 cents per share on revenue of $14.71 billion, according to Thomson Reuters I/B/E/S.