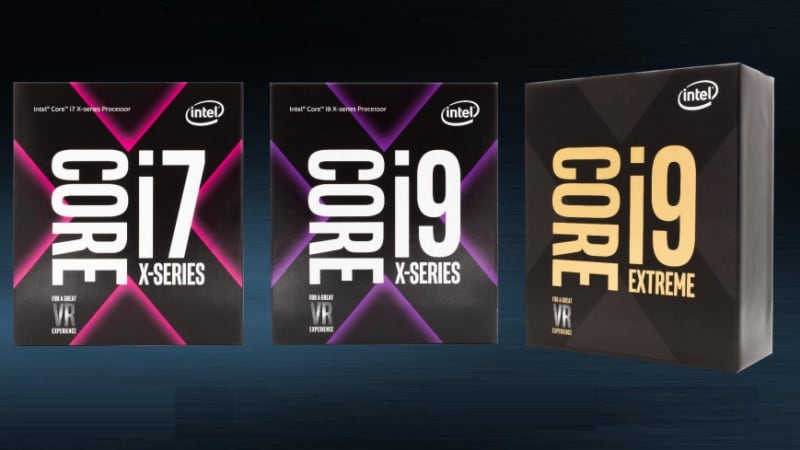 At the ongoing Computex 2017 trade show in Taipei, Intel has introduced a brand new Core-X series of high-end desktop CPUs along with a brand new X299 chipset to go along with it. Of note, is the new Intel Core i9 series, and the 18-core Core i9 Extreme Edition. Typically, Intel’s high-end desktop CPUs have always been a generation behind their mainstream counterparts. For instance, Broadwell-E was launched at a time when Skylake was mainstream but this time, Intel has brought its high-end SKUs on par with today’s mainstream architectures with Skylake-X and Kaby Lake-X CPUs. Availability and exact pricing for India should be known in the coming months.

We begin with Kaby Lake-X, which will initially launch with two SKUs – a Core i7-7740X and a Core i5-7640X. The Core i7-7740X is a quad-core CPU running at 4.3GHz and a boost clock of 4.5GHz, supports HyperThreading, 8MB of L3 cache and supports 16 PCIe 3.0 lanes. The Core i5 variant will run at a slightly lower 4GHz with a boost clock of 4.2GHz and does not support HyperThreading. The L3 cache is also a bit lower at 6MB but it does support the same number of PCIe lanes. Both CPUs will support dual channel DDR4 memory at up to 2666MHz and have the same TDP of 112W. Kaby Lake-X CPUs won’t support Intel’s Turbo Boost Max 3.0 technology.

Skylake-X CPUs will support Intel’s Turbo Boost Max 3.0 technology (except for the Core i7-7800X) along with higher core counts (up to 18 cores), more than double the PCIe lanes and support for quad-channel DDR4 memory. Intel has so far announced three SKUs for the Skylake-X CPUs, starting with the Core i7-7800X. This CPU runs at 3.5GHz with boost clock set to 4GHz and features six cores with HyperThreading. The slightly faster Core i7-7820X CPU runs at slightly higher clock speed but also packs in eight cores with 11MB of L3 cache and 28 PCIe lanes.

In order to differentiate the extreme edition SKUs, Intel has introduced a brand new Core i9 series and right now, we only have details about the Core i9-7900X. The base and boost clock speeds are lower compared to the other Core-i7 models in the line up but this CPU has 10 cores with HyperThreading, 13.75MB of L3 cache and a massive 44 PCIe lanes. Intel has listed the names of future Core i9 CPUs but haven’t revealed finer details of clock speeds, cache, etc, yet. This includes the 12-core Core i9-7920X; 14-core Core i9-7940X; 16-core Core i9-7960X and the insane 18-core Core i9-7980XE.

All CPUs from the Core-X family will be using Intel’s new X299 chipset, which uses a new LGA 2066 socket. The new chipset introduced features like DMI 3.0 link which should help improve throughput times and support for Intel Optane memory. It also brings I/O capabilities like support for up to 24 PCIe 3.0 lanes, up to eight SATA 3.0 ports and up to 10 USB 3.0 ports. We can expect to see new motherboards from Intel’s board partners showing up in the months to come.

Speaking on the launch, Gregory Bryant, Corporate Vice President and General Manager Client Computing Group said in a blog post, “The Intel Core X-series processor family introduces a series of firsts that reflect the extreme performance we are delivering. This family includes Intel’s first teraflop desktop CPUs, a prime example of just how much raw compute these processors can handle. We’re also introducing the entirely new Intel Core i9 processor, representing the highest performance for advanced gaming, VR and content creation. At the top of the lineup is the new Intel Core i9 Extreme Edition processor – the first consumer desktop CPU with 18 cores and 36 threads.”