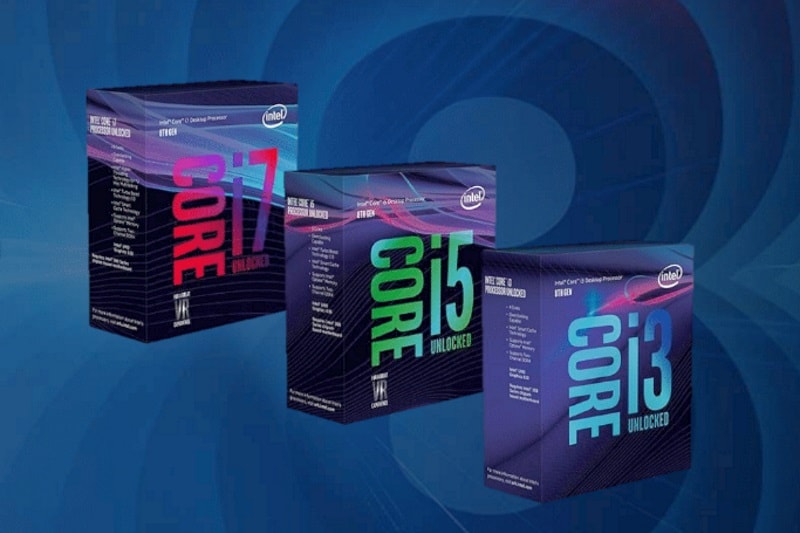 Intel has announced a new lineup of 8th Generation Core CPUs for desktops, all of which have more cores than ever before. The new top-end Core i7-8700K and Core i7-8700 feature six cores and twelve threads, while the new Core i5-8600K and Core i5-8400 also have six cores but without Hyper-Threading, and the Core i3-8350K and Core i3-8100 have four physical cores without Hyper-Threading. All six of the newly announced processors are based on Intel's "14nm++" Coffee Lake architecture, which is the second of three different architectures that the 8th Generation portfolio will be based on.

Details and specifications of the six newly announced processors have been leaked widely, and all six are already listed as being available for preorder on Indian websites. They will go on sale as boxed retail units on October 5, but branded desktop PCs featuring these processors will come later in Q4 2017.

Intel singles out the top-end Core i7-8700K as its "best ever" gaming CPU, with up to 25 percent higher frames-per-second scores in today's games compared to the Core i7-7700K. This creates an overlap with the previous-generation high-end Core X-series parts, such as the Core i7-7740X and Core i9-7900X. Intel says that its X-series chips are still better for "megatasking" applications such as gaming while streaming and encoding video simultaneously, but the Core i7-8700K is now better for just gaming.

All new CPUs feature Intel's integrated graphics capabilities, but there's nothing new compared to the previous generation except for higher clock speeds. Core i7 models have 12MB of cache, while Core i5 models have 9MB and Core i3 models have 6MB. Core i7 and i5 CPUs now support up to dual-channel DDR4-2666 RAM while Core i3 ones are limited to dual-channel DDR4-2400. Models with the K suffix are multiplier unlocked to support overclocking, and have 91-95W TDP ratings while the others are rated at 65W. Per-core overclocking is now supported on K models, there is more fine-grained power tweaking, and RAM latency adjustments don't require a reboot anymore.

Intel's decision to increase core counts and change the definitions of its Core i7, i5 and i3 product tiers can be seen as a response to AMD's Ryzen 7, 5 and 3 lines. AMD's return to success after nearly a decade has been greatly helped by the fact that it was able to disrupt Intel's pricing model and delivered more cores per dollar, especially at the low-end. Intel claims up to 32 percent faster 4K video editing compared to equivalent 7th Gen CPUs, and up to 7.8X speed improvements in content creation tasks compared to a three-year-old Core i7-4790K.

The announcement follows Intel's surprise revelation last month that 8th Gen CPUs for laptops would be based on a different architecture, called Kaby Lake Refresh. Intel is staggering the launches of its architectures, and is expected to unveil its first 10nm processors for ultraportables, codenamed Cannonlake, early next year. Coffee Lake is described as "14nm++" because it is a further optimisation on the 14nm manufacturing process which has extended its life beyond the original two year "tick-tock" cadence, and now well beyond the three-year "process-architecture-optimisation" cycle that was supposed to take effect. Notably, no new Pentium and Celeron models are included in the 8th Gen desktop CPU lineup so far, and it is unknown what architecture they will be based on.

Desktop 8th Gen Core CPUs have the same number of pins as 6th and 7th Gen models but will need new motherboards and a new platform controller. Intel says this is because of the more robust power routing needed to support the higher number of cores, and so neither motherboards nor CPUs will be backwards compatible. The company has announced only one model, the Z370, which supports up to DDR4-2666 RAM when paired with a Core i7 CPU. All major motherboard vendors including Asus, Gigabyte, MSI and ASRock are expected to announce refreshes of their Z270 motherboards to support these new processors.