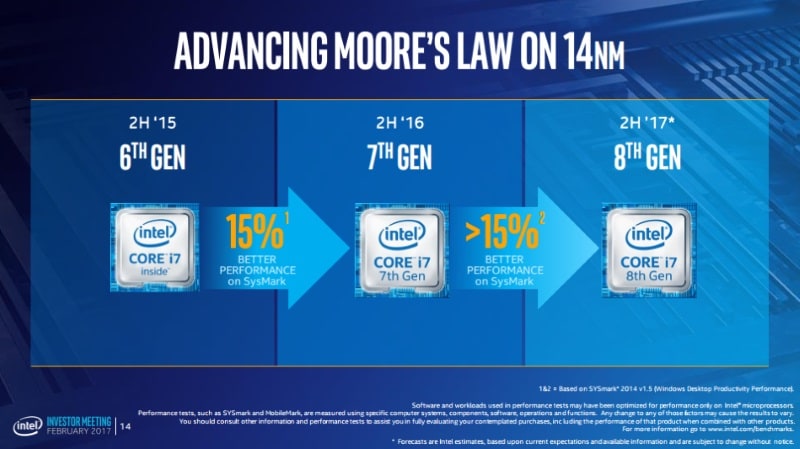 Intel has confirmed rumours that there will be a fourth generation of CPUs on its 14nm manufacturing process. During its annual Investor Day seminar, the chipmaker announced that it will not use the newer 10nm process across its entire lineup, instead moving to a "fluid" model depending on product segments. The announcement comes after Intel CEO Brian Krzanich showed off a 2-in-1 device running on a working 10nm prototype CPU at CES 2017 last month.

The company will be rolling out 10nm CPUs later this year, but will target CPUs for product segments were power consumption and heat dissipation are more important, such as slim fanless tablets, ultrabooks and 2-in-1s. Desktop and mainstream CPUs will be built on the 14nm process for an unprecedented fourth generation. Interestingly, Intel has announced that its next generation of Xeon chips for datacentres will also move to the next process node early, to take advantage of a forecast of increased demand.

Intel for several years followed a "tick-tock" cycle of annual refreshes, alternating between new architectures and new manufacturing processes until last year. Citing manufacturing complexities, the company announced that the Cannonlake generation, expected on its 10nm process in 2016, would be delayed, with a new stopgap called Kaby Lake launched on the existing 14nm process instead. Intel called this new cadence "Process-Architecture-Optimisation", indicating that Kaby Lake would deliver higher performance by virtue of refinements to the 14nm process, and that a two-year gap between process shrinks was no longer realistic. However, with a fourth 14nm generation now confirmed, this model has already been broken.

Recent rumours had suggested that Intel was planning for a fourth "optimisation" within this cycle, codenamed Coffee Lake, which would be a refresh of Kaby Lake for mainstream segments, while Cannonlake would be introduced in limited quantities for thin and light devices. Intel has only confirmed that there will be 14nm processors in the mix of products sold as "8th Generation Core", not whether its 10nm and 14nm products will use the same architecture.

The company has indicated that it expects a 15 percent boost in performance over Kaby Lake, which is the same modest improvement that Kaby Lake has delivered compared to Skylake. It has not confirmed any specific CPU configurations, particularly whether or not these upcoming CPUs will have more than the usual four CPU cores.

Intel will face renewed competition from AMD's new Ryzen CPUs, which are expected to launch in early March. AMD has not been able to produce anything capable of matching the higher-end models in Intel's product line, but it is now promising to do just that.