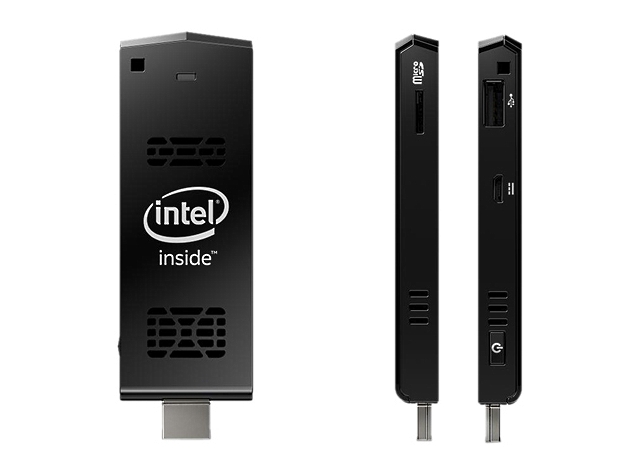 Intel's miniature PC - the Compute Stick - was launched at CES 2015 and is now up for pre-orders via third-party online retailers in the US.

Priced at $149.99 (approximately Rs. 9,000), the Windows 8.1-powered (with 2GB RAM, 32GB flash) variant of the Intel Compute Stick listed by online retailer Newegg is due for release on April 24. Meanwhile, Amazon and Zones have listed the Linux variant of Compute Stick with 1GB RAM and 8GB flash. The Amazon listing doesn't include a price as of now, but the Zones listing prices it at $104.99 (approximately Rs. 6,400).

The Intel Compute Stick is a four-inch-long HDMI dongle that is roughly the size of a Google Chromecast and can be plugged into any HDMI port the same way. It will come with Windows 8.1 or Linux pre-installed, and will provide a full PC experience. The stick also includes a full-sized USB port and a microSD card slot. 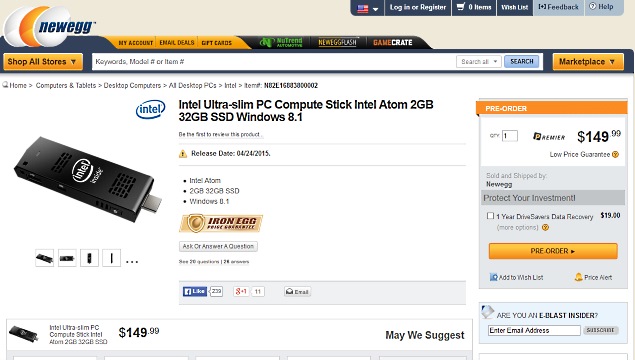 The Compute Stick is based on a low-power 64-bit quad-core Intel Atom processor (Bay Trail), much the same as the ones powering recently launched low-cost Windows tablets. The Windows version is listed to feature 2GB of RAM, and 32GB of built-in storage, apart from Wi-Fi 802.11 b/g/n and Bluetooth 4.0 connectivity. No real details are available for the Linux versions, though the listings mention 1GB and 8GB, presumably for memory and storage respectively.

Recently, Google and Taiwan's Asus also launched a "computer on a stick" which can plug into a display to turn it into a PC. The Asus Chromebit would be arriving mid-year with a low price tag.

"Smaller than a candy bar, the Chromebit is a full computer that will be available for less than $100," Google said. "By simply plugging this device into any display, you can turn it into a computer. It's the perfect upgrade for an existing desktop and will be really useful for schools and businesses."

Google's statement didn't offer any other details about the device.