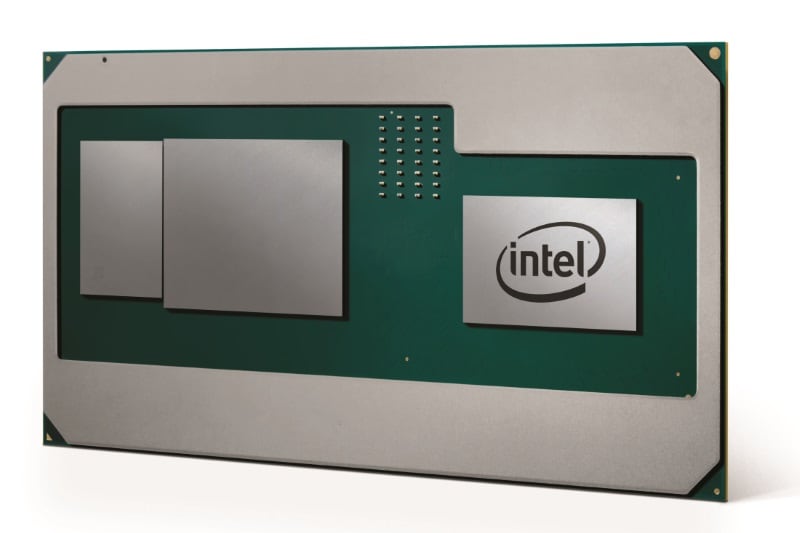 In a surprise move that turns decades of PC industry history on its head, Intel and AMD have announced a joint effort to develop a processor that integrates Intel's CPU architecture and AMD's graphics technology. The new chip will be aimed at thin and light notebooks for gamers and enthusiasts, and the companies both say that it will deliver the same gaming performance as today's discrete notebook GPUs, but will require less than half the footprint.

The initiative is referred to as a single chip, not a product line. It will be part of Intel's current 8th Generation notebook processor lineup, and is expected to launch in the first quarter of 2018. The collaboration between Intel and AMD has been rumoured for some time, with some reports going so far as to suggest that Intel was in talks to acquire AMD's Radeon Technologies Group in an effort to better compete with Nvidia.

Enabling the new chip is a combination of both companies' recent developments. According to Intel, its new Embedded Multi-Die Interconnect Bridge (EMIB) technology allow the heterogenous CPU and GPU to coexist on a single package and communicate with each other at very high speed. It also helps make the manufacturing of such a chip easier. Intel also says that it has developed an advanced power sharing framework that allows power to be delivered and balanced between the CPU, GPU and embedded graphics memory, which allows notebooks to be designed thinner and lighter, with simpler cooling requirements.

AMD is treating the GPU as a semi-custom part, just like the ones it ships for the Xbox One X and PlayStation 4 Pro. The end product will be a "multi-chip processor package" with discrete dies on the same physical processor. It will use 3D-stacked HBM2 memory, making it the first such mobile implementation. According to AMD, HBM2 consumes less power and takes up less space than GDDR5.

The move should boost both Intel and AMD's fortunes in the market, though neither company has offered any clue about what this means for both Intel's own integrated graphics efforts, and AMD's APUs. Intel's 8th Generation chips announced over the past few months did not have any significant improvements to their graphics subsystems, indicating that little new work had taken place in-house. However, AMD announced its own mobile Ryzen chips with integrated Vega graphics just last week, and these will have to coexist with the new offering. Intel's integrated graphics capabilities have lagged behind its competition for years, while on the other hand AMD's weak CPUs before the Ryzen generation handicapped its ability to sell APUs.

For users, this means thin and light laptops with far more graphics horsepower than before. The companies are promising high-end experiences with today's AAA games and content creation programs. Small-form-factor desktops could also be on the cards. No actual performance data has been released yet. It's also unclear how this chip will be named, marketed and sold, but we can expect the hype to be off the charts in the runup to its launch.