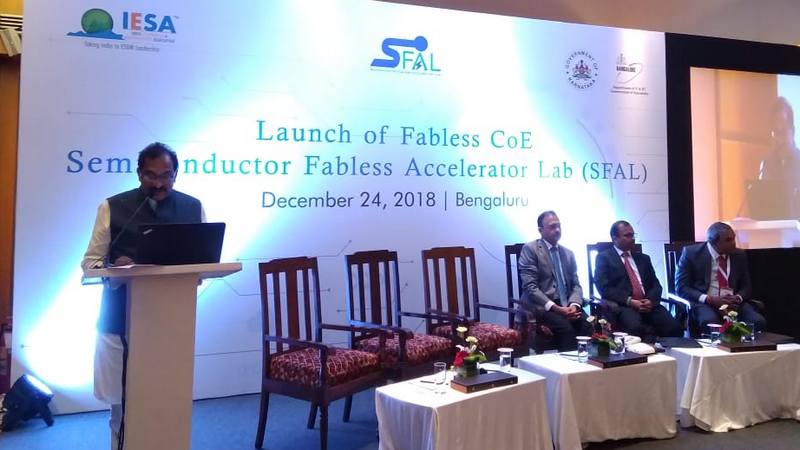 The Indian Electronics and Semiconductor Association (IESA) on Monday opened a fabless laboratory in Bengaluru to incubate early-stage startups for chip designing and make small and medium enterprises (SMEs) to access funds and enter the market.

"The lab is aimed at incubating 20 early stage fabless startups in three years and 50 in the next five years for chip designing and create jobs in the electronics system design and manufacturing (ESDM) sector," said IESA president Rajesh Ram Mishra.

Unveiling the lab, Karnataka Minister for Large & Medium Industries K.J. George said the state government had invested Rs. 21.5 crore in the facility and would spend an additional Rs. 56 crore in expanding over the next five years.

"Our vision is to make Karnataka the hub around which the next breed of Indian fabless startups can thrive and accentuate the other fabless companies into the next realm of growth. Along with IESA, we will propel the ESDM sector and support innovative domestic companies," said George at the lab inaugural event.

The IESA estimates creation of about 800 jobs for skilled engineers as a result of setting up the lab.

Fabless manufacturing is the design and sale of hardware devices and semiconductor chips while outsourcing the fabrication of the devices to a specialised manufacturer called a semiconductor foundry.

"Our aim is to incubate 3-4 companies in the new facility by March 2019. The lab fills a critical gap in our ESDM ecosystem that will prepare us as a country to capitalise on the trends unleashed by electronics," Mishra added.

An IESA report release at its Vision Summit in February stated that the Indian semiconductor component market is estimated to see huge market growth of $32.35 billion (roughly Rs. 2.25 lakh crores) by 2025.