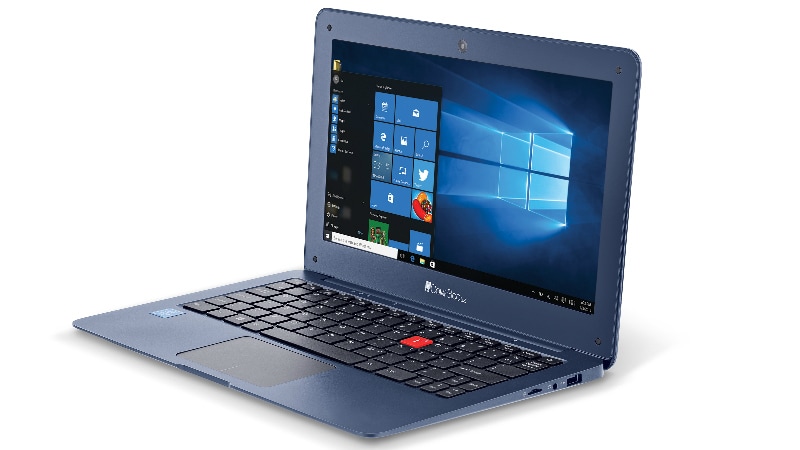 After introducing the iBall CompBook Premio v2.0 (Review) in February, the domestic tech brand has now launched the Merit G9 CompBook in India. The laptop is powered by an Intel Celeron N3350 processor, runs Windows 10, and offers six hours of battery like. The iBall CompBook Merit G9 is cheaper than the Premio v2.0, and is already available across India for the price of Rs. 13,999.

iBall states that the Merit G9 CompBook is a lightweight laptop at 1.1kg, and has been made available in Cobalt Blue. The laptop runs on Windows 10, and has an 11.6-inch HD (1366x768 pixels) display with touchpad and multi-touch functionality. As mentioned, the iBall CompBook Merit G9 is powered by a 2.4GHz Intel Celeron N335 processor, and is paired with 2GB of DDR3 RAM. The laptop packs 32GB of internal storage, with the option to expand further via a microSD card (up to 128GB). Alternatively for more storage, external HDD/ SSD support of up to 1TB is also provided.

The iBall CompBook Merit G9 has a 0.3-megapixel web camera, dual speakers, and a 3.5mm audio jack as well. It packs a 5000mAh (38Wh) Li-Polymer battery that the company claims lasts for six hours in normal working conditions. Furthermore, the laptop can last for seven hours of video playback (offline), and 20 hours of audio playback (offline) as well. Connectivity options include Bluetooth 4.0, Intel Dual Band Wireless-AC 3165, HDMI ver.1.4a port, and USB ports of 2.0 and 3.0 respectively. The dimensions of the laptop are at 30x20.3x2.5cm, and the weight of the Merit G9 is at 1.1kg as mentioned before.

"iBallCompBook Merit G9 fits perfectly, catering the everyday computing needs, and is built to focus on design and premium functionality. It is an all-in-one laptop balanced with premium looks and functionality, designed for the day to day performance," Sandeep Parasrampuria, CEO and Director of iBall said in a statement.

The iBall CompBook Premio v2.0 that was launched earlier in the year is priced a little higher at Rs. 21,999. It comes with a touchpad and multi-touch functionality, is powered by the Intel Apollo Lake N4200 Pentium quad-core processor, offers 4GB of DDR3 RAM and has 32GB of in-built storage, expandable up to 128 GB via microSD slot.