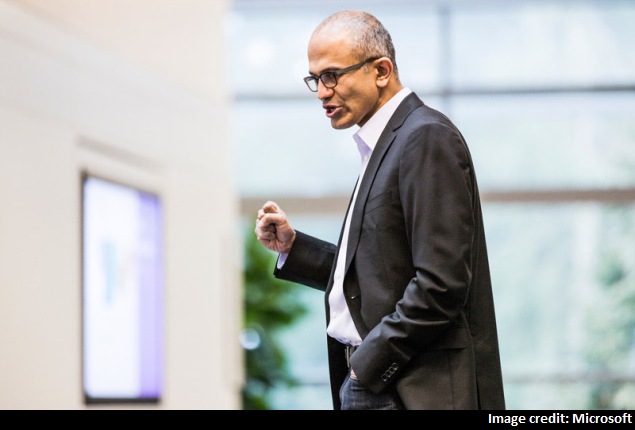 Microsoft on Tuesday announced that Satya Nadella (pronounced sa-TEE-ya na-DELL-uh) would be its next leader, betting on a longtime engineering executive to help the company keep better pace with changes in technology.

The selection of Nadella to replace Steven A. Ballmer, which was widely expected, was accompanied by news that Bill Gates, a company founder, would step down from his role as chairman and become a technology adviser to Nadella.

John W. Thompson, 64, a member of the Microsoft board who oversaw its search for a new chief executive, will become the company's chairman, replacing Gates.

"During this time of transformation, there is no better person to lead Microsoft than Satya Nadella," said Gates, who will remain a member of Microsoft's board. "Satya is a proven leader with hard-core engineering skills, business vision and the ability to bring people together."

In a statement, Nadella said, "Microsoft is one of those rare companies to have truly revolutionized the world through technology, and I couldn't be more honored to have been chosen to lead the company."

In Nadella, Microsoft's directors selected both a company insider and an engineer, suggesting that they viewed technical skill and intimacy with Microsoft's sprawling businesses as critical for its next leader. It has often been noted that Microsoft was more successful under the leadership of Gates, a programmer and its first chief executive, than it was under Ballmer, who had a background in sales. Ballmer, 57, said in August that he was stepping down.

Nadella, 46, from Hyderabad, India, will be only the third chief executive of Microsoft, an icon of U.S. business that has struggled for a position in big growth markets like mobile and Internet search. The company has correctly anticipated many of the biggest changes in technology - the rise of smartphones and tablet computers, to use two examples - but it has often fumbled the execution of products developed to capitalize on those changes.

It remains to be seen whether Nadella's technical background, along with the closer involvement of Gates in product decisions, will give the company an edge it lacked during the Ballmer years. Microsoft said in a statement that Gates will "devote more time to the company, supporting Nadella in shaping technology and product direction."

"I think he's the right person for the company right now," Frank Artale, a former Microsoft manager who works with Ignition Partners, a venture capital firm in the Seattle area, said of the selection of Nadella. "A strong technical leader is truly needed there."

Nadella is a contrast to Ballmer in other ways. Most recently the executive vice president of Microsoft's cloud and enterprise businesses, Nadella peppers his conversations and speeches with technical buzzwords that people outside the industry would most likely find impenetrable.

Nadella, who has been married for 22 years and has three children, counts cricket and poetry among his hobbies. In an email to Microsoft employees Tuesday, he wrote that he is "defined by my curiosity and thirst for learning."

"I buy more books than I can finish," he wrote. "I sign up for more online courses than I can complete. I fundamentally believe that if you are not learning new things, you stop doing great and useful things."

A whippet-thin runner, he is known as a cerebral, collaborative leader with a low-key style that differs from Ballmer's bombastic manner. While many executives within Microsoft tend to be polarizing figures, Nadella appears to be well liked in much of the company. Still, those who know Nadella, say he is not a pushover.

"Managers have to keep proving themselves every day," Artale said.

Nadella's star at Microsoft rose considerably in the past several years as he took charge of the company's cloud computing efforts, a business considered vital as more business customers choose to rent applications and other programs in far-off data centers rather than run software themselves.

For years, Microsoft did not pay enough attention to how the cloud - primarily through services offered by Amazon, its crosstown rival - was attracting the creativity of a new generation of developers. When he got control of the division that included Microsoft's cloud initiatives, Nadella changed that. He began meeting with startups to hear more about what Microsoft needed to do become more responsive to their needs.

"When you look at the most exciting things happening in tech, all the platform shifts happening and disruption - social, mobile, cloud - Microsoft has not even been part of the conversation until recently," said Brad Silverberg, a Seattle-area investor and a former Microsoft executive. "With Satya's leadership, Microsoft is doing interesting things in cloud."

As chief executive of the entire 100,000-person company, Nadella will have to grapple with a much broader set of challenges in markets in which he has little experience, like mobile devices. He will inherit a deal to acquire Nokia's mobile handset business, along with 33,000 employees, and a wide-ranging reorganization plan devised by Ballmer and still in progress.

In an interview in July, Nadella was supportive of the reorganization plan, which he predicted would allow Microsoft to adapt to changes in the market more quickly than in the past.

"It's not like our old structure didn't allow us to do some of this," he said. "The question is whether you can amplify."

When Nadella joined Microsoft in 1992, it was still a scrappy, relatively small software company led by Gates that was just beginning its greatest years of growth. His familiarity with the company's history and culture was said to have been an important factor in Gates' comfort with Nadella as chief executive, according to someone briefed on the search for a new leader who asked for anonymity because the process was private.

But in an interview in April, he said the most important factor in Microsoft's ability to remain a growing business in the future was its ability to become a player in what he called new paradigms in computing, like cloud computing.

"That is, you could say, the existential issue for us," Nadella said.

"I think that with any new paradigm there will always be a couple of new players who come at it," he continued. "But to me the thing that is perhaps more interesting and challenging, and gets me excited, is, hey, how can we renew ourselves?"

In his statement Tuesday, Nadella said: "The opportunity ahead for Microsoft is vast, but to seize it, we must focus clearly, move faster and continue to transform. A big part of my job is to accelerate our ability to bring innovative products to our customers more quickly."